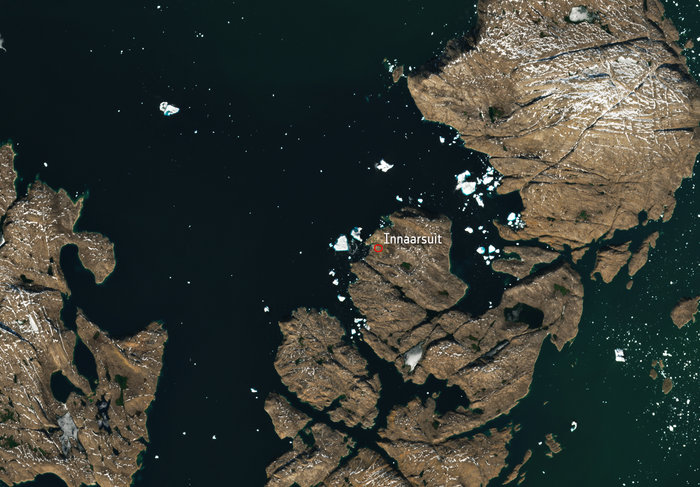 Today’s Image of the Day from the European Space Agency (ESA) shows a massive iceberg moving toward the west coast of Greenland. Huge iceberg threatens coastal village in Greenland

According to the ESA, the ten-million-ton iceberg is breaking up as it approaches the small village of Innaarsuit. The calving could potentially cause large waves capable of wiping out parts of the village, and some residents have been evacuated as a precaution.

The image was captured by Sentinel-2A on July 9, 2018. Greenland (Greenlandic: Kalaallit Nunaat, pronounced [kalaːɬit nunaːt]; Danish: Grønland, pronounced) is the world’s largest island,located between the Arctic and Atlantic oceans, east of the Canadian Arctic Archipelago. It is an autonomous territory within the Kingdom of Denmark. Though physiographically a part of the continent of North America, Greenland has been politically and culturally associated with Europe (specifically Norway and Denmark, the colonial powers, as well as the nearby island of Iceland) for more than a millennium. The majority of its residents are Inuit, whose ancestors migrated from Alaska through Northern Canada, gradually settling across the island by the 13th century. Also the Huge iceberg threatens coastal village in Greenland even more than ever.