• Earth.com Earth.com A humpback whale rolls on its side

A humpback whale rolls on its side 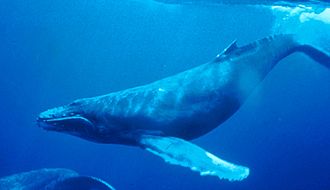 A humpback whale rolls on its side, the humpback identifies as three classes of behavior- simple side‐roll, side‐roll inversion, and repetitive scooping.

The humpback whale will often roll onto their side or back and slowly slap the water’s surface with one fin or both fins at the same time.

Also like other large whales, the humpback was a target for the whaling industry.

Once hunted to the brink of extinction, its population fell by an estimated 90 percent before a 1966 moratorium.

While stocks have partially recovered to some 80,000 animals worldwide, tangled fishing gear, collisions with ships and noise pollution continue to impact on the species.

A new study from the 1980’s on whales in the North Atlantic gave researchers detailed information on gestation times, growth rates and calving periods.

Although the  humpback whales social structure is loose-knit.

It typically, individuals live alone or in small, transient groups that disband after a few hours.

Also longer-term relationships between pairs or small groups, lasting months or even years, have rarely been observed. Some females possibly retain bonds created cooperated feelings for a lifetime.

Humpback whales often leap out of the water, a behavior known as “breaching”, and slap the water with their fins or tails.

Therefore whale song is thought to have an important role in mate selection; however, they may also be used between males to establish dominance.