Hurricane Alex in the Gulf of Mexico 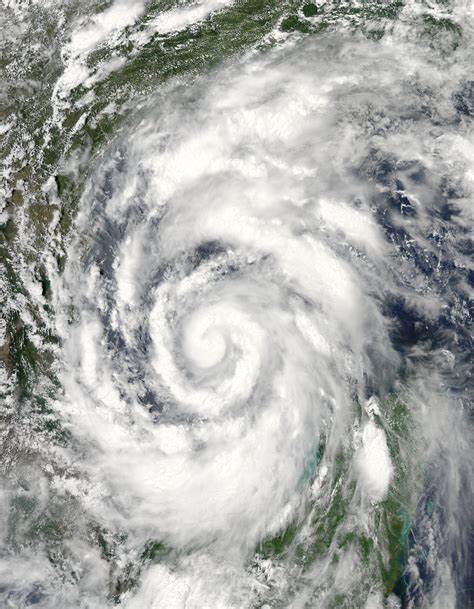 Hurricane Alex spanned the Gulf of Mexico, from the Yucatán Peninsula to the Louisiana coast, on June 29, 2010. The Moderate Resolution Imaging Spectroradiometer (MODIS) on NASA’s Aqua satellite captured this natural-color image the same day. Thick, opaque clouds spiral outward from the center of the storm, and cloud cover stretches the entire north-south length of the Gulf. Clouds skirt New Orleans and the Mississippi Delta.

According to the U.S. National Hurricane Center (NHC)’s 10:00 a.m. CDT advisory on June 30, Hurricane Alex was not forecast to travel in the direction of the Mississippi Delta or the oil slick. Instead, the storm was headed toward the northwest at roughly 7 miles (11 kilometers) per hour, in the direction of northern Mexico.

Alex was forecast to strengthen later that day, according to the NHC, and to bring substantial rainfall—6 to 12 inches (15 to 30 centimeters)—over northeastern Mexico, and up to 20 inches (50 centimeters) in isolated spots. A Category 1 hurricane, Alex had maximum sustained winds of 80 miles (130 kilometers) per hour. The NHC reported that hurricane-force winds extended from the storm center outward up to 60 miles (100 kilometers), and tropical-storm-force winds extended outward up to 200 miles (320 kilometers).

The arrival of the first hurricane in June is in keeping with the National Hurricane Center’s prediction of an above-average storm season. It is rare for a named storm to intensify to a hurricane in June. The last time it happened was in 1995, when Hurricane Allison formed in early June. The NHC predictions for an active season were based in part on the end of El Niño conditions in the Pacific and a possible transition to La Niña, as well as on the unusually high sea surface temperatures in the Caribbean and tropical Atlantic.