Internal Waves in the Celebes and Banda Seas • Earth.com

Internal Waves in the Celebes and Banda Seas 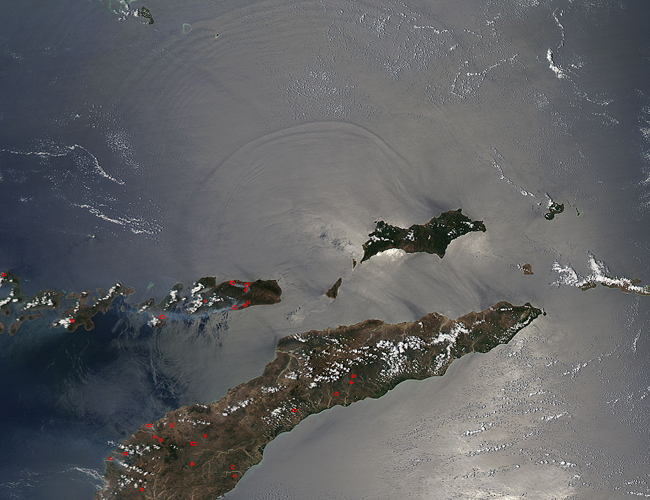 Internal Waves in the Celebes and Banda Seas.A silver band of sunglint highlights internal waves in the Celebes, Molucca, and Banda Seas around Indonesia in this Moderate Resolution Imaging Spectroradiometer (MODIS) image. Sunglint occurs when the sun reflects off the surface of the water directly into MODIS’ “eye,” creating a glare. If the ocean were perfectly smooth, the sunglint would be a bright circular reflection of the sun. But since the sea is rough, and not a perfect mirror, the circle is distorted into the band visible here.

Sunglint is interesting in that it highlights features that would not ordinarily be visible in the images. Here, the sunglint shows both internal waves and the regular scan lines that mark the beginning and end of MODIS’ double-sided scan mirror. The scan lines, caused by small differences between the two sides of the scan mirror, are evenly spaced diagonal lines. Internal waves tend to occur in more irregular circular packets.

As the name implies, internal waves are wave that occur in the ocean. The ocean is made up of different layers of water that have different densities. When the dense lower layer is dragged against a rough surface on the sea floor, it ripples. The resulting wave travels between two layers of the ocean. Unlike surface waves, internal waves can travel for long distances and can stretch up to tens of kilometers in length.

The MODIS instrument on the Aqua satellite acquired this image on October 28, 2003.