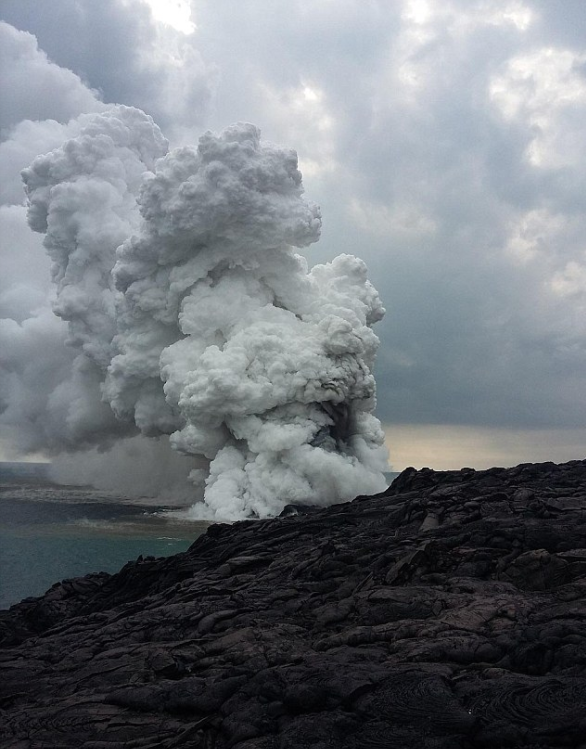 Today’s Image Of The Day shows a spectacular occurrence from the Kamokuna ocean entry in Hawaii. A 26 acre chunk of land, a lava delta formed by an active volcano, collapsed and fell into the ocean.

The fall caused massive waves and sent towering clouds of steam and dust into the sky.

Lava deltas form when oozing lava reaches the ocean and cools, building new land on a very unstable foundation. This particular lava delta was created by the lava from the Kilauea volcano, the youngest and most active Hawaiian shield volcano. According to the National Park Service, the Kilauea volcano is almost constantly erupting but does not pose a threat to nearby communities.

Lava deltas, however, are extremely dangerous for several reasons. First, the loose and uneven way that they form makes lava deltas likely to collapse at any time. Even worse, the plume released when lava hits the ocean water is filled with a corrosive, hydrochloric acid harmful to lungs, skin, and eyes.

When park rangers heard cracking in the rocks, they quickly closed the Kamokuna viewing area to visitors. But several tourists managed to sneak beyond the blockaded area just 15 minutes before the cliff collapsed.

“It was a really close brush with death for them,” said Travis Delimont, the park ranger on duty. “Luckily, they finally listened to us and turned around in time.”

“Had anyone been close by on land, water, or air, lives would surely had been lost,” added Cindy Orlando, Park Superintendent.