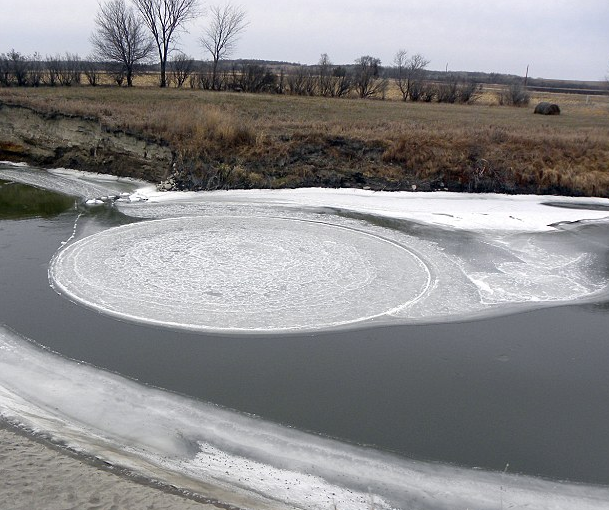 Today’s Image Of The Day comes from Michigan, where a bizarre perfect ice circle has been spotted spinning counter-clockwise on top of a river.

The ice circle was found on the Pine River by locals in Vestaburg, Michigan. While its perfect dimensions make the circle seem man-made, the spinning sheet of ice is actually completely naturally-occurring.

A similar phenomenon was seen in North Dakota in 2013. There, residents found a perfect ice circle rotating on the Sheyenne River.

At first, many thought it had to be the river currents pushing alongside the ice, causing the disk to spin. But an ice circle this large would be too heavy to be rotated by the water itself.

A team of scientists from Liège University in Belgium finally cracked the case and found the real reason why such ice disks can spin on their own.

In an experiment, the team used magnets to simulate river currents. Then, using blocks of ice in petri dishes, they noticed that the ice would start to rotate even without a current. The researchers realized this was due to melting ice around the perimeter flowing into the surrounding water.

The team published their reported their findings in a paper published in the journal Physical Review E.