Lingering Floods Along the James River 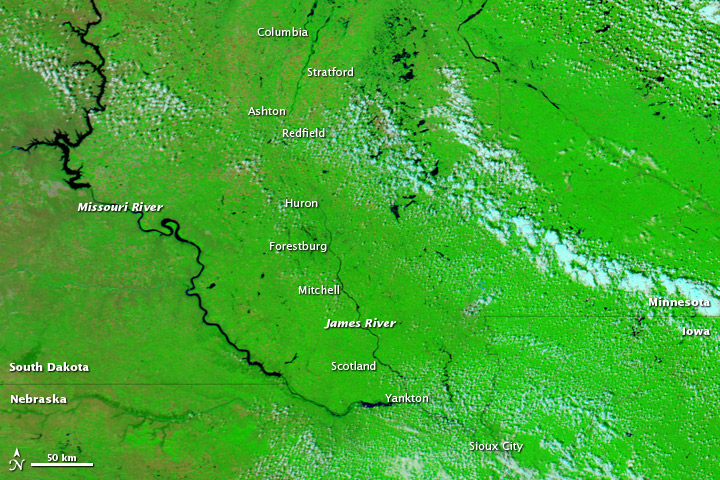 Floods lingered along the James River in South Dakota in early August 2011. The Moderate Resolution Imaging Spectroradiometer (MODIS) on NASA’s Aqua satellite captured the top image on August 1, 2011. For comparison, the bottom image shows the same area a year earlier, on August 6, 2010.

Both images use a combination of visible and infrared light to increase contrast between water and land. Water is navy blue. Depending on land cover, land appears green or brown. Clouds range in color from white to pale blue-green.

Although subtle, flooding along the James River is discernible, especially between Stratford and Forestburg. In both years, the river narrows enough in parts of that stretch to disappear from the satellite sensor’s view (although that doesn’t mean the river is dry). But in 2010, the river virtually disappears through most of that distance; in 2011, it remains visible south of Ashton and north of Huron. In 2011, higher water is also apparent on the Missouri River west of Yankton.

Floods in the Missouri River Basin in 2011 were driven by a combination of heavy snowpack and heavy rains.