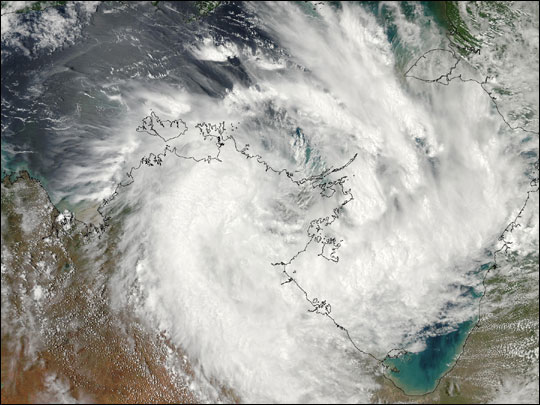 On January 6, 2003, Low-Pressure Storm System over Australia. Therefore a low-pressure storm system hovered over the Gulf of Carpentaria and northern Australia. Also bringing much needed rain to the drought stricken continent. This image of the storm was captured by the Moderate Resolution Imaging Spectroradiometer (MODIS) instrument. Also flying aboard NASAs Terra satellite.

Australia, officially the Commonwealth of Australia, is a sovereign country comprising the mainland of the Australian continent. And the island of Tasmania. Also and numerous smaller islands. It is the largest country in Oceania and the world’s sixth-largest country by total area.

The neighbouring countries are Papua New Guinea, Indonesia, and East Timor to the north; the Solomon Islands and Vanuatu to the north-east. Also and New Zealand to the south-east. Australia’s capital is Canberra, and its largest city is Sydney.

The country’s other major metropolitan areas are Melbourne, Brisbane, Perth, and Adelaide. Therefore you can see that this image will show a lot of clouds and white storms over the city. Australia is known for storms and tropical weather hits hard every year. Also bringing the rain the country helps tremendously with their drought.