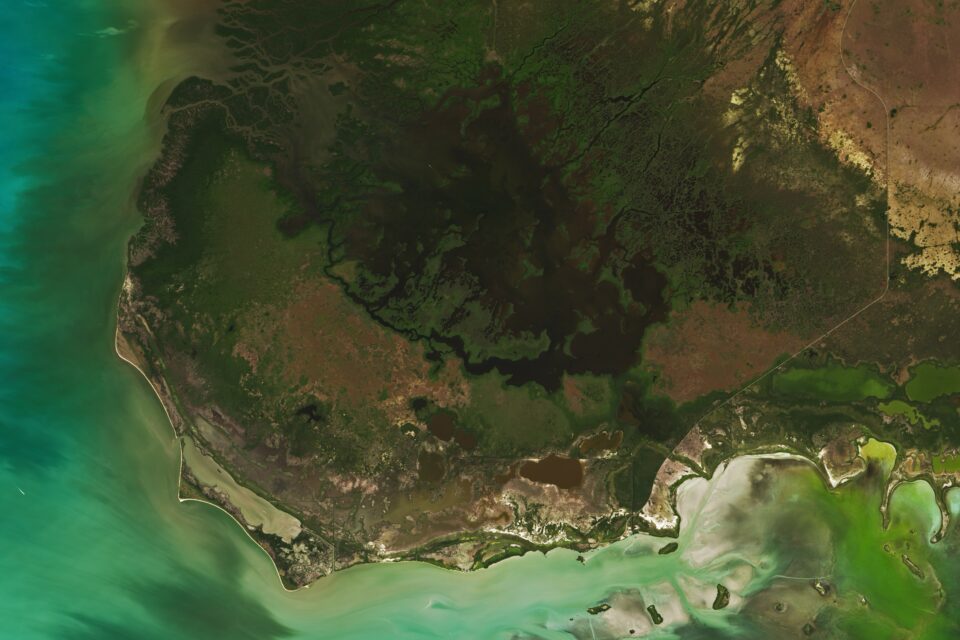 Today’s Image of the Day from NASA Earth Observatory features the Florida Everglades where scientists with the NASA Carbon Monitoring System team have been studying methane emissions from wetlands.

“Levels of methane in Earth’s atmosphere are soaring. In April 2022, NOAA reported that concentrations of the potent heat-trapping greenhouse gas averaged 1,895.7 parts per billion (ppb) over the past year, a new record. The 17 ppb increase in 2021 was the largest recorded since systematic measurements began in 1983. That followed a 15 ppb increase in 2020,” reports NASA.

According to Benjamin Poulter, the growth in 2020 and 2021 is surprising and unexpected. “What really worries me is that we don’t understand what’s causing this increase, whether it’s human activities or climate-change feedbacks, or a combination of both.”

Methane levels are affected by human activities and natural processes. The global network of monitoring stations can measure methane, but does not show where the methane is actually coming from.

“Methane is released from wetlands by armies of anaerobic bacteria that thrive in waterlogged soils and help break down decomposing vegetation,” explains NASA. “Recently, a growing body of research indicates that certain types of trees found in wetland areas – both living and dead – may also move methane from waterlogged soils into the air or produce the gas directly.”

The image shows one of the areas that was sampled by the team. It is a mostly dead mangrove forest in Cape Sable, Florida.

“There’s a slight depression in that area, and the storm surge from Irma dumped a huge amount of water that pooled up and couldn’t drain,” explained David Lagamasino, a mangrove expert at East Carolina University who participated in the expedition. “The mangroves were dead within months. Snags are still standing, but I don’t expect these forests to recover. These areas are on the way to becoming mud flats or ponds.”

Mangroves are known for being particularly good at storing large amounts of carbon in the soil around them. “But if some portion of that carbon is leaking back into the atmosphere in the form of methane, that’s something we need to understand and incorporate into our modeling,” said Poulter.

“BLUEFLUX will help us get a better handle on wetland emissions in the Caribbean, but this is just one small piece of the methane budget,” said Poulter. “We need a much more comprehensive and sustained strategy for monitoring methane fluxes on a global scale. Our current observing systems are totally inadequate given the challenges we face.”