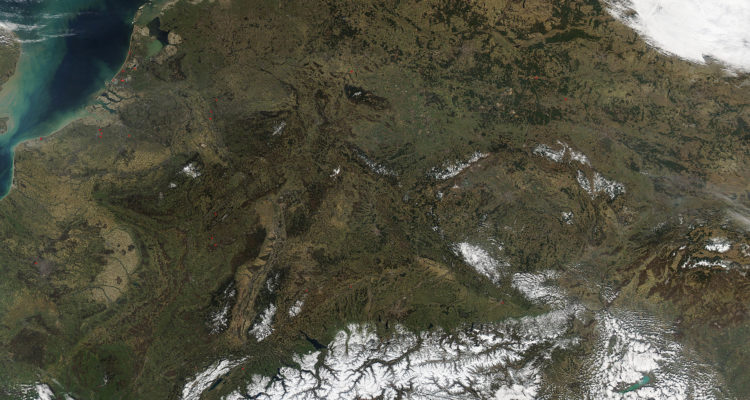 The Moderate Resolution Imaging Spectroradiometer (MODIS) aboard NASA’s Aqua satellite flew over North-central Europe on March 17, 2016, and acquired a true-color image of a rare cloud-free day over the entire region.

Parts of two major regions of Europe are seen in this image: the North European Plain and the Alpine Mountains. The North European Plain lies north of the Alps and extends from the Pyrenees Mountains on the French-Spanish border eastward to the Ural Mountains in Russia. A number of countries are covered by the plain. In this image, we see parts of France, Belgium, Luxembourg, The Netherlands, Denmark, Germany, Czech Republic, and Poland.

Most of the North European Plain lies below 500 feet (152 meters) in elevation, with flat or gently undulating terrain. Most of the region was scraped by glaciers during the Pleistocene, which left glacial deposits (moraines), including hilly terminal moraines which mark the furthest southward extent of the glaciers. The open nature of the plain has encouraged human activity, and it is a busy agricultural region as well as heavily populated.

South of the North European Plain lies the Alps, which is part of the Alpine Region of Europe. The Alpine countries captured in this image include France, Switzerland, Liechtenstein and Austria. To the far north lies the North Sea (west) and the Baltic Sea (east), white the northernmost tip of the Adriatic Sea can be viewed in the far south. The rugged topography limits agriculture, but the beautiful landscape allows tourism to flourish, including winter sports such as skiing in the snow-covered Alps.