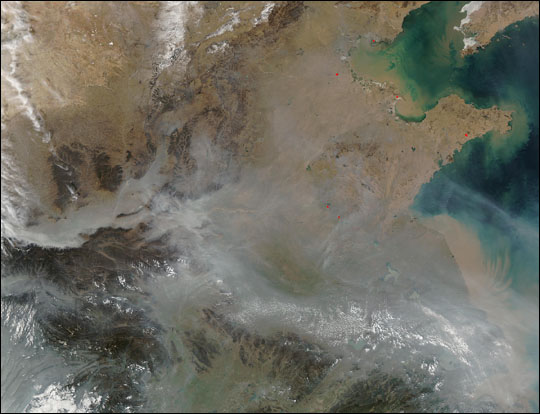 The MODIS sensor aboard NASA’s Aqua satellite observed a heavy pall of pollution over China and much of eastern China on February 19, 2003. The haze appears to be particularly thick over the Shaanxi and Henan provinces in the eastern central part of the country.

Notice how the pollution tends to “pool” up around mountainous terrain in the higher resolution version of this scene. The various light brown hues show bare land surface, while the darker browns show vegetated landscapes. A heavy discharge of sediments into the Bo Hai Bay and western Yellow Sea are coloring the surface waters caramel. There are a few red dots in this scene, indicating the locations of active fires.

The high-resolution image provided above is 500 meters per pixel. The MODIS Rapid Response System provides this image at MODIS’ maximum spatial resolution of 250 meters. China emerged as one of the world’s first civilizations, in the fertile basin of the Yellow River in the North China Plain. For millennia, China’s political system was based on hereditary monarchies, or dynasties, beginning with the semi-legendary Xia dynasty in 21st century BCE. Since then, China has expanded, fractured, and re-unified numerous times. Also In the 3rd century BCE, the Qin reunited core China and established the first Chinese empire.