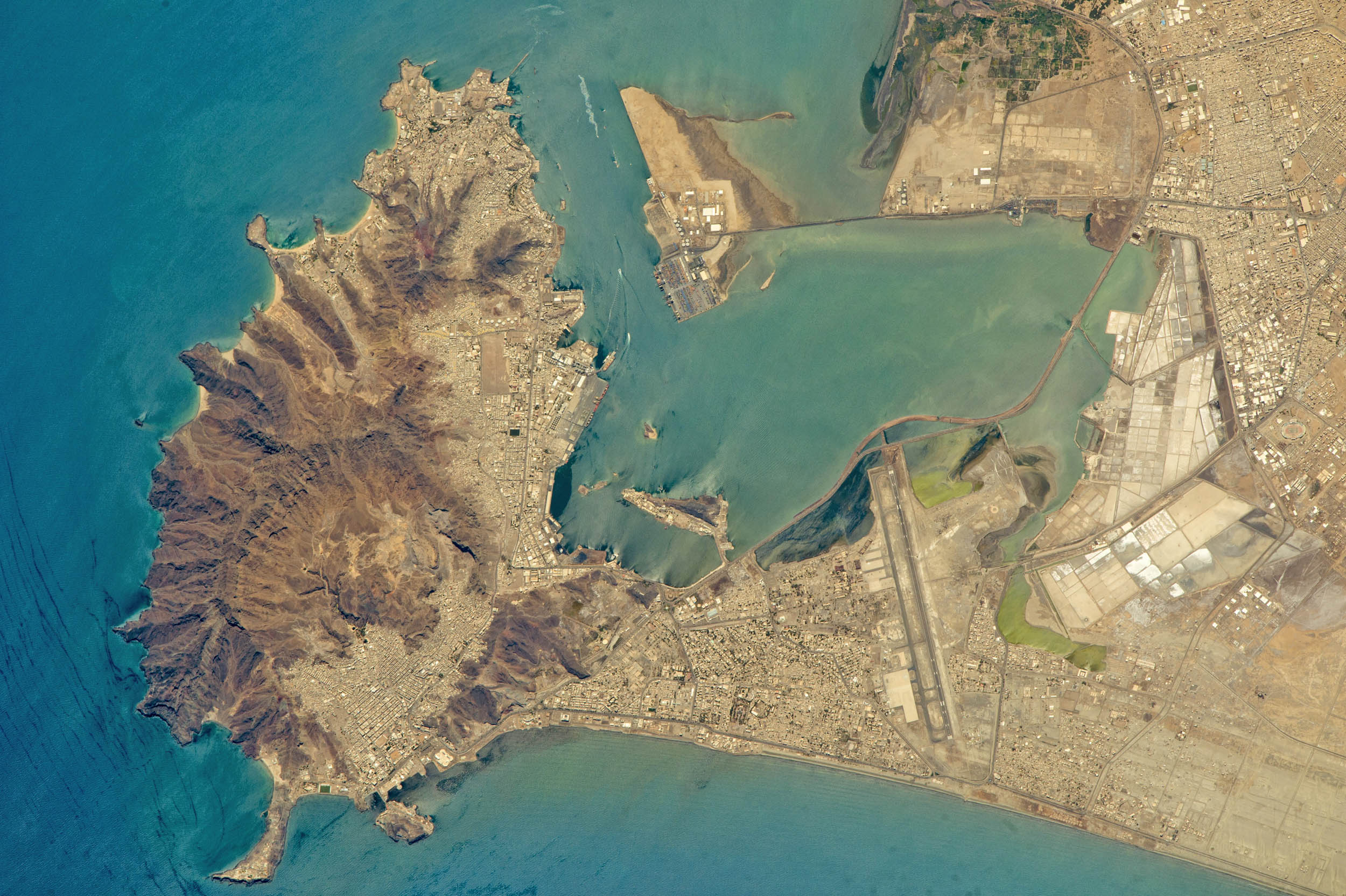 Port of Aden, Yemen Orbiting almost directly over the port of Aden, an astronaut aboard the International Space Station (ISS) took this photograph of the rugged, extinct volcano, the flat sand spit next to it, and the big bay that now all form the port of Aden. Part of the city (just south of the volcano) is known as the Crater neighborhood, and residents can look downhill onto the docks of the old port and the Sira Fortress, an 11th century fortification on a small island just offshore.

The tourist section of Aden is Gold Mohur, which takes advantage of the beaches and surf of this open coastline and the dramatic backdrop of the volcano. On the well-protected bay side of the volcano lies the much larger harbor of Al Mu’alla, the economic hub of Aden. NASA’s view.

The flat lands of the sand spit are full of salt ponds, where sea water can be evaporated in the near-constant sunshine. Salt production has been a major export from Aden for centuries.

Aden lies near the south end of the Red Sea, at a critical point where major sea lanes converge—between Egypt and the Mediterranean Sea, the Persian Gulf and India, and the long shoreline of East Africa. To protect those sea lanes, Great Britain occupied Aden and the surrounding southern parts of the Arabian Peninsula from 1839 to 1967. The small enclave of Djibouti, on the opposite coast in Africa, was held by France for the same reason.

Astronaut photograph ISS047-E-111699 was acquired on May 9, 2016, with a Nikon D4 digital camera using an 1150 millimeter lens, and is provided by the ISS Crew Earth Observations Facility and the Earth Science and Remote Sensing Unit, Johnson Space Center. The image was taken by a member of the Expedition 47 crew. The image has been cropped and enhanced to improve contrast, and lens artifacts have been removed. The International Space Station Program supports the laboratory as part of the ISS National Lab to help astronauts take pictures of Earth that will be of the greatest value to scientists and the public, and to make those images freely available on the Internet. Additional images taken by astronauts and cosmonauts can be viewed at the NASA/JSC Gateway to Astronaut Photography of Earth. Caption by M. Justin Wilkinson, Texas State University, Jacobs Contract at NASA-JSC.