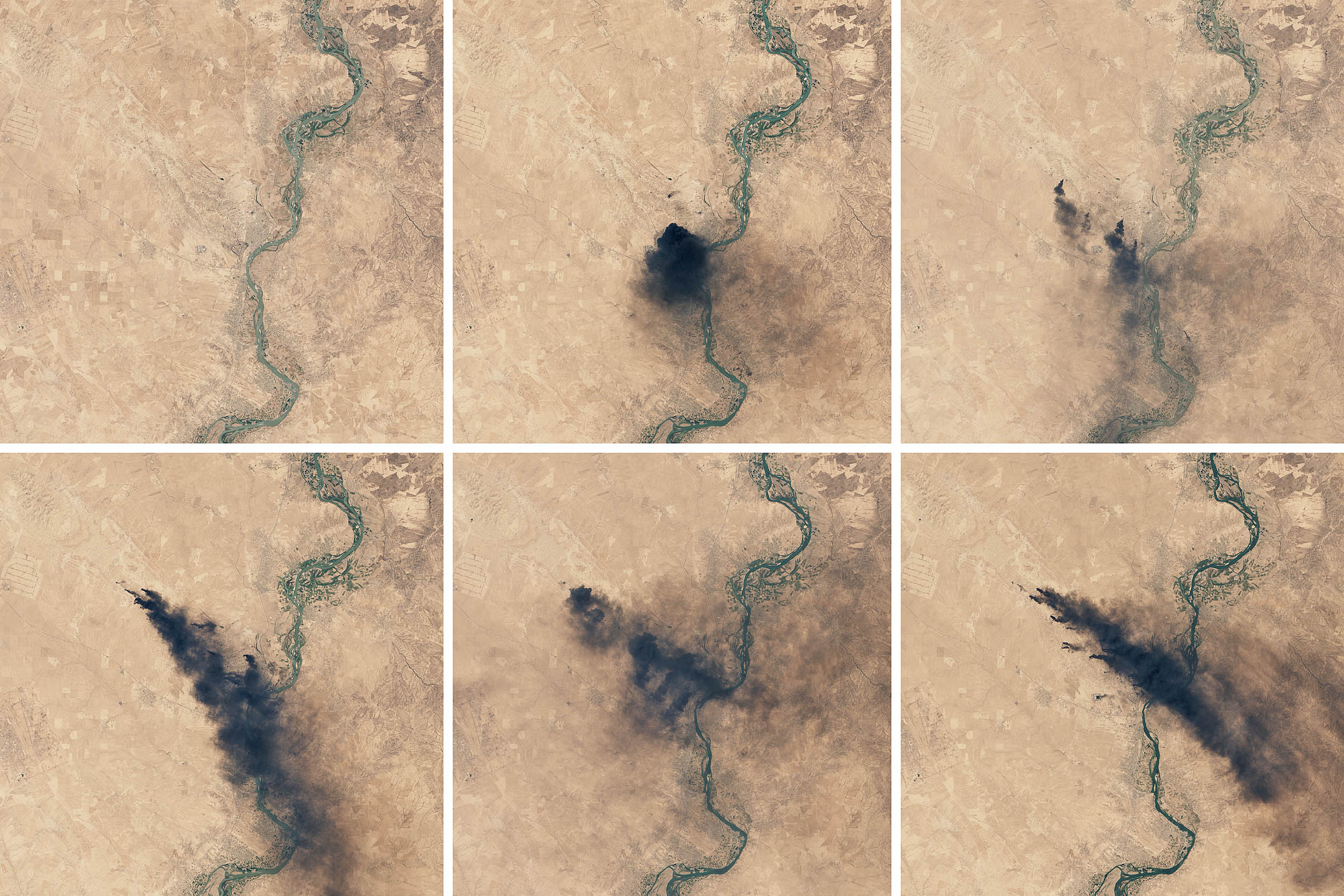 For the past few months, a smoke plume has shifted with the winds over northern Iraq. In recent years, periodic oil fires have cast a dark pall over this arid landscape. They are one consequence of ongoing war in the region.

On August 17, 2016, the Operational Land Imager (OLI) on Landsat 8 acquired an image (above) of dense smoke plumes roughly 50 kilometers (30 miles) south of Mosul. There appear to be multiple sources of fire, most likely oil wells from the Qayyarah oil field. The images in the grid below show the plumes changing direction and thickness since they were first spotted by Landsat 8 on June 14.

Ronald Ferek of the U.S. Office of Naval Research saw those fires firsthand in June 1991. “We flew across whole plumes and did a cross-section, calculating how many barrels had to be burning,” he said. His team used LIDAR to quantify carbon flux and deduce the carbon dioxide emitted. The fires consumed roughly 4.6 million barrels of oil a day, according to their estimates.

At the time, some scientists warned of dire effects, including a “nuclear winter” cooling effect at Earth’s surface. Some airborne smoke particles can reflect sunlight, driving down temperatures on the ground. Following the theory, particles in the oil smoke would rise into the stratosphere and stay aloft for weeks or months over the Northern Hemisphere.

But most of the fires in Kuwait did not spill over and burn in pools standing on the ground, as predicted. Instead, they caught fire in the air, Ferek said, when oil shot out of the ground at high pressures.

“At 1500 PSI (pounds per square inch), oil comes out like an aerosol spray can rather than a garden hose,” he said. As result, the flames were bathed in oxygen and burned more cleanly than earlier research had indicated they would.

Like the current fires in Iraq, many of Kuwait’s fires produced thick, dark smoke. The plume color is dependent on the type of fuel burning. Factors like humidity, wind, and fuel density also affect the smoke’s color, said Ralph Kahn, an atmospheric scientist at NASA’s Goddard Space Flight Center. Kuwait’s natural gas fires, many of which burned alongside oil fires, produced grayish white smoke palls, due in part to the high salt content from the briny substrate there.

As with biomass burning, a critical factor in oil fires is the ratio between flaming to smoldering. Oxygen-starved, smoldering fires (such as those burning in peatlands) produce large amounts of smoke and particulate matter. Meanwhile, flames that are well-supplied with oxygen can burn more efficiently, breaking down much of the matter and producing more black smoke.