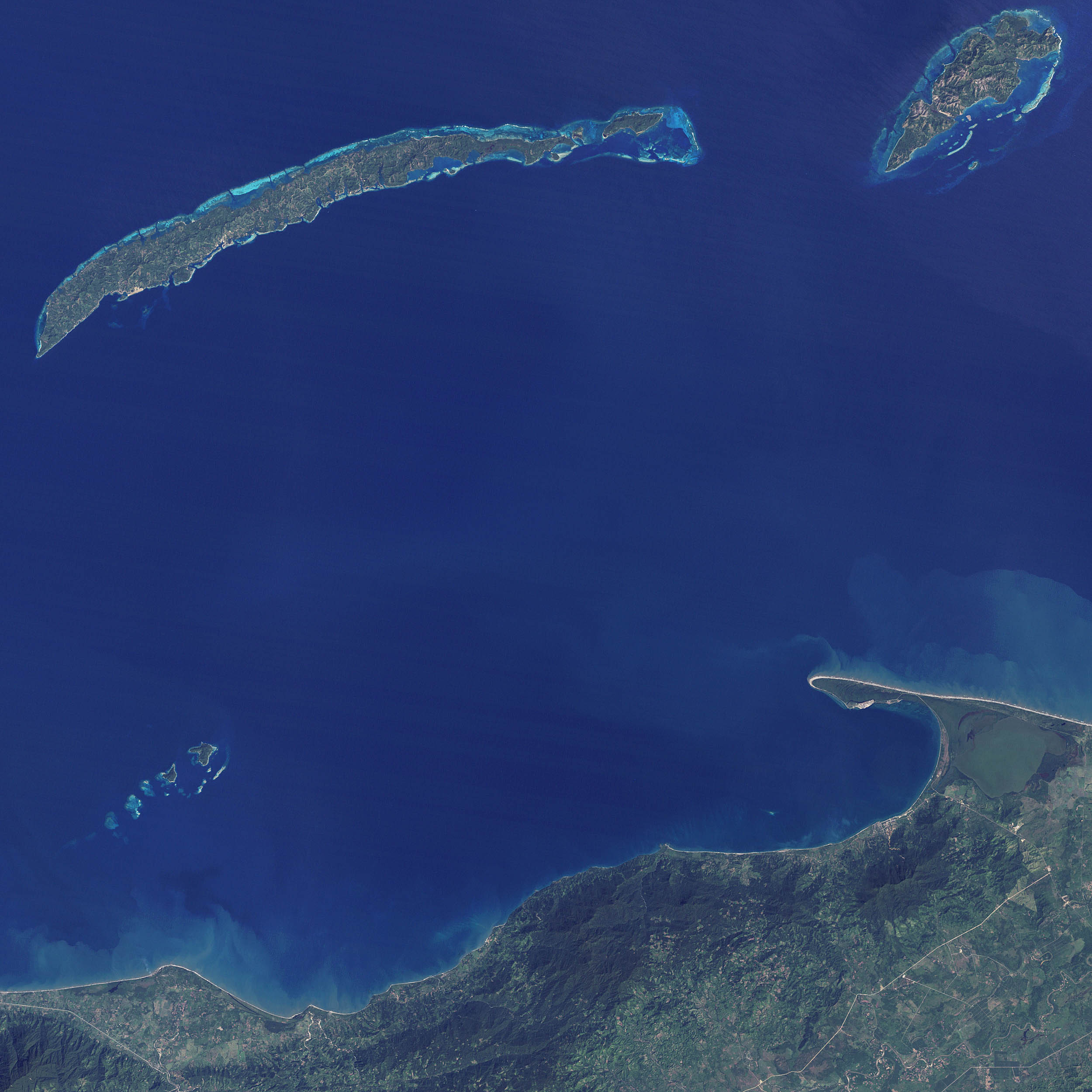 Roatán, a small island off the northern coast of Honduras, is booming. Located along the southern reaches of the Meso-American reef, Roatán has become a major destination for tourists, many of whom are drawn to its white sand beaches and plentiful diving and snorkeling opportunities.

The number of people visiting the island each year has risen from about 900 in 1970 to 100,000 in 2000. By 2010, more than 1 million people were visiting each year. Much of the growth has been fueled by the cruise ship industry, which has more than quadrupled the number of ships arriving at Roatán ports since 2000.

As tourists flock to the island, the size of the local population also has risen. In the most recent census by the Honduran government (2014), the population of the island was 109,000 people—four times the number reported in 2001.

Coral reefs and other shallow marine areas appear turquoise; deeper waters are navy blue. Onshore, the forested interior of the mountainous island appears green. Developed areas are gray. Turn on the image comparison tool to see how much development has changed the island since 1985.

Much of the development has been focused on the western part of Roatán, where the footprint of towns such as Coxen Hole and French Harbor have increased substantially. New cruise ship terminals near Coxen Hole and Mahogany Bay have become major gateways to the island. A large luxury golf resort was built near Pristine Bay. Expansion of the airport has increased the number and size of airplanes that can access the island.

A preliminary analysis of Landsat data by Cascade Tuholske, a geographer at the University of California, Santa Barbara, shows that the built environment on the island increased by 300 percent between 1985 and 2014. “There is an interesting contradiction playing out on Roatán,” said Tuholske. “On the northern coast in the areas of Sandy Bay and West End, the island’s development has lead to increased marine conservation awareness and the establishment of marine protected areas. On the southern coast, the boom in tourism is causing increased ecosystem damage through the cutting of mangroves, sewage runoff, and increased garbage.”

The changes may have public health implications as well. “This ecological change is correlated to an increased burden of disease, in part due to fecal contamination of water caused by development without proper water and sanitation improvements,” explained Tuholske. “The increase in development may also be linked to increases in vector-borne diseases such as dengue fever and chikungunya.”