Sea lion mugs for camera after rescue from fishing gear 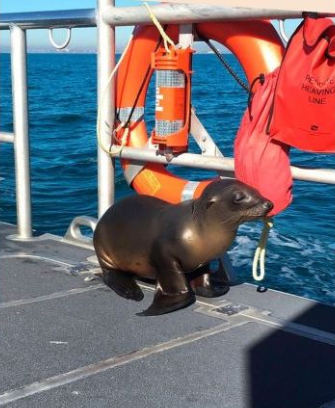 Sea lions are friendly, fascinating creatures. This is why interactions between sea lions and humans often produce smile-inducing results. Such was the case with a sea lion who got caught up in fishing gear off of the Southern California coast and received a hand from the Coast Guard.

After the Coast Guard crew freed the sea lion from its entrapments, it happily jumped up on the boat and mugged for their cameras. The crew transferred the sea lion to the Pacific Marine Mammal Center so it could receive further treatment before being released.

Every year, sea lions get caught on fishing lines and tangled in nets. Fishermen often spot these cigar-shaped creatures with fishing lines hanging from their mouths or looped around their necks. The Marine Mammal Center of California indicates that these are common problems for sea lions. Often, rescuers are able to approach the unfortunate sea lion and free it or capture it for further treatment.

In late 2016, Russian fisherman were shocked when they emptied a net to reveal a huge sea lion sitting in the mountain of fresh-caught fish. Thankfully, with the squirt of a water hose and a little persuasion, the monstrous creature abandoned what must have seemed like a fishy smorgasbord.

While the Southern California sea lion had a happy ending to its story, others aren’t as lucky. Although they typically aren’t trapped or hooked due to malicious behavior on the part of humans, careless behavior on the part of fishermen and beach goers can lead to sea lions becoming injured unnecessarily. SeaWorld San Diego spokesperson Dave Kootz reminds people to properly store and discard fishing lines and nets in order to protect ocean life.