Snow in Lesotho and South Africa 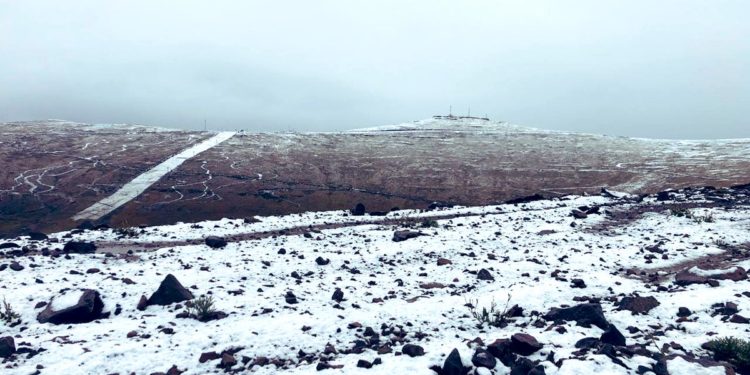 Heavy snow fell over eastern South Africa and Lesotho during the final week of July 2004. As can be seen in this Moderate Resolution Imaging Spectroradiometer (MODIS) image, acquired on July 29, by the Aqua satellite, the snow extended much further than the peaks of the mountains where it typically falls in the Southern Hemisphere’s winter. The spine of the mountain range is highlighted by the snow, forming a slanted question mark against the brown winter landscape. The unusual snowfall trapped hundreds of motorists in mountain passes and knocked out power and telephone service across the region, according to local news reports.

Lesotho (/ləˈsuːtuː/ (listen),[6] Sotho pronunciation: [lɪˈsʊːtʰʊ]), officially the Kingdom of Lesotho (Sotho: ‘Muso oa Lesotho), is an enclaved country within the border of South Africa. It is one of only three independent states completely surrounded by the territory of another country, and the only one outside of the Italian peninsula. Lesotho is just over 30,000 km2 (11,583 sq mi) in size and has a population of around 2 million. Its capital and largest city is Maseru.

Lesotho was previously the British Crown Colony of Basutoland, but it declared independence from the United Kingdom on 4 October 1966. It is now a fully sovereign state that is a member of the United Nations, the Commonwealth of Nations, and the Southern African Development Community (SADC). The name Lesotho roughly translates to “the land of the people who speak Sesotho”