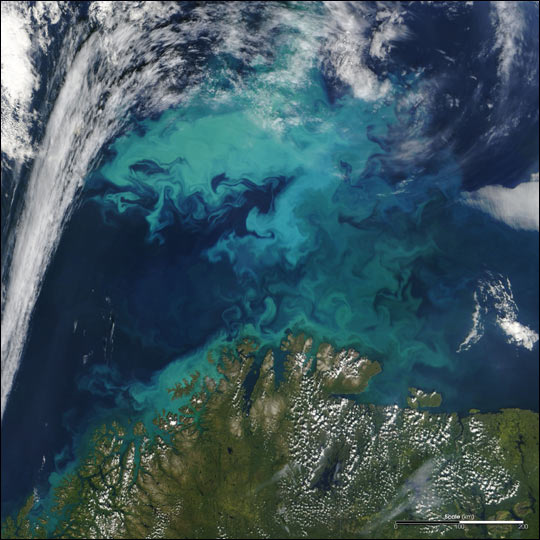 Phytoplankton bloom near Norway form brilliant swirls of green in the Barents Sea north of Norway. Phytoplankton are microscopic marine organisms that thrive in nutrient-rich cold waters. The striking turquoise color is caused in part by sunlight reflecting off of chlorophyll in the phytoplankton, which (like terrestrial plants) use the process of photosynthesis to create carbohydrates from carbon dioxide and water.

The brightness of the color indicates that the plants are probably coated with calcium carbonate, white chalk, which makes the water appear a bright blue in satellite imagery. Phytoplankton blooms are common in the Barents Sea in the summer, after winter’s ice has receded from the region.

The Moderate Resolution Imaging Spectroradiometer (MODIS) on NASAs Aqua satellite acquired this image on July 27, 2004. The large image provided above is at MODIS maximum resolution of 250 meters per pixel. It is available from the MODIS Rapid Response Team in additional resolutions.

Norway has a total area of 385,207 square kilometres (148,729 sq mi)  and a population of 5,312,300 (as of August 2018). The country shares a long eastern border with Sweden (1,619 km or 1,006 mi long). Norway is bordered by Finland and Russia to the north-east, and the Skagerrak strait to the south, with Denmark on the other side. Norway has an extensive coastline, facing the North Atlantic Ocean and the Barents Sea. The maritime influence also dominates Norway’s climate with mild lowland temperatures on the sea coasts, whereas the interior, while colder, is also a lot milder than areas elsewhere in the world on such northerly latitudes