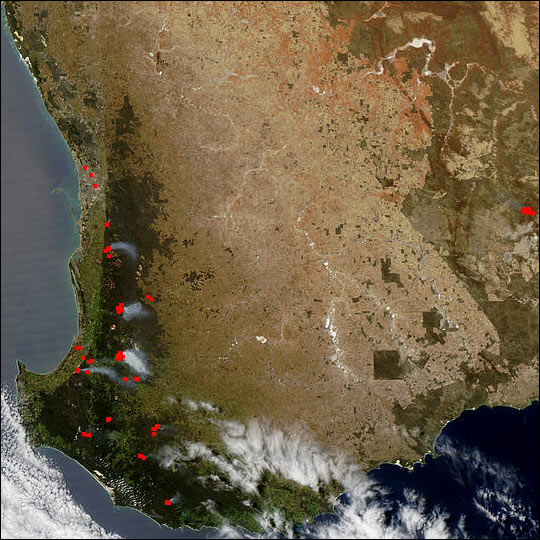 The southwest corner of Australia is no exception to the abundance of wildfires burning across the continent. On November 7, 2002, the Moderate Resolution Imaging Spectroradiometer (MODIS) on the Aqua satellite captured this image of southern Western Australia. Along the coast, the northernmost cluster of fires (red dots) appears to be burning in or near the city of Perth. Summer, with its drought-like conditions, has yet to arrive, and the region is already ablaze.

Australia, officially the Commonwealth of Australia,  is a sovereign country comprising the mainland of the Australian continent, the island of Tasmania, and numerous smaller islands. It is the largest country in Oceania and the world’s sixth-largest country by total area. The neighbouring countries are Papua New Guinea, Indonesia, and East Timor to the north; the Solomon Islands and Vanuatu to the north-east; and New Zealand to the south-east. The population of 25 million is highly urbanised and heavily concentrated on the eastern seaboard.

Australia’s capital is Canberra, and its largest city is Sydney. The country’s other major metropolitan areas are Melbourne, Brisbane, Perth, and Adelaide. Southwest Australia Fires have taken over the coast line during this storm season. Therefore you will see a lot more closer to shore than inland. The red dots show and indicate how close they burn to the water. Also all down the coast with few to none burning more inland just east of the coast line of the southwest Australia fires.