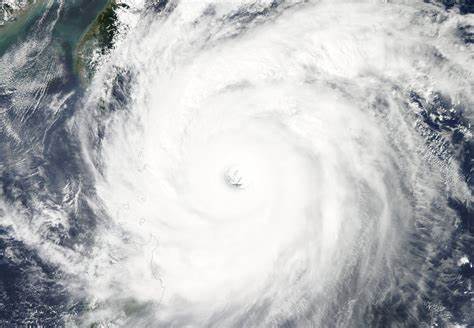 On September 27, 2012, Super Typhoon Jelawat was located northeast of the Philippines, continuing a northward trip over the western Pacific Ocean. The Moderate Resolution Imaging Spectroradiometer (MODIS) on NASA’s Aqua satellite took this picture the same day. Sporting a distinct eye, the storm spanned hundreds of kilometers and some of its clouds extended over the Philippines and Taiwan.

On September 27, the U.S. Navy’s Joint Typhoon Warning Center (JTWC) reported that Jelawat was located about 410 nautical miles (760 kilometers) south-southwest of Kadena Air Base, Okinawa. The storm had maximum sustained winds of 135 knots (250 kilometers per hour) and gusts up to 165 knots (305 kilometers per hour). The projected storm track showed Jelawat, which had been moving northwest, changing course and heading toward the northeast on September 27. The storm was expected to pass over Japan in the coming days.

Typhoon Jelawat, known in the Philippines as Typhoon Lawin, was the most intense tropical cyclone of the 2012 Pacific typhoon season in terms of ten-minute maximum sustained winds, tied with Typhoon Sanba. Following Bolaven and Sanba, Jelawat was the third typhoon directly hitting Okinawa Island in 2012. Jelawat, which means carp in Malaysian, is a type of freshwater fish.

Jelawat reached peak intensity late on September 24 and maintained it for nearly two days. The typhoon passed through Okinawa Prefecture on September 29 and finally made landfall over Aichi Prefecture in Japan on September 30. Jelawat was the strongest typhoon for Okinawa Island in 2012 by observed winds, as it also killed 2 people in Japan