Flooding along the Susitna River 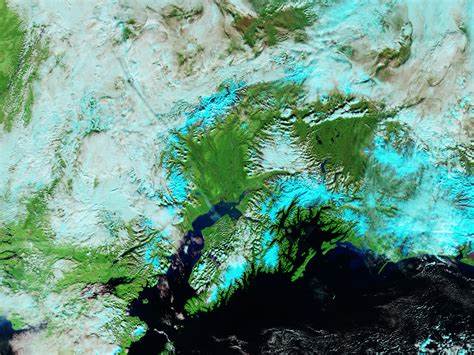 In September 2012, a week-long rainstorm in southern Alaska pushed multiple rivers over their banks. On September 21, the Anchorage Daily News reported that the Susitna River rose so much that it backed up into its tributaries, and some residents described the floods as the worst they had witnessed in 30 years. Floods closed roads, destroyed more than a dozen homes, and damaged more than 800 other structures, according to bulletins from the Matanuska-Susitna Borough. Flooding forced residents of Talkeetna to flee their homes and seek refuge in emergency shelters.

These images show the Susitna River Valley as it drains into Cook Inlet. The Moderate Resolution Imaging Spectroradiometer (MODIS) on NASA’s Aqua satellite captured the top image on September 30, 2012. MODIS on the Terra satellite captured the bottom image a year earlier. Both images use a combination of visible and infrared light to increase contrast between water and land. Water varies in color from electric blue to navy. Vegetation is bright green. Snow and clouds are pale blue-green.

At the end of September 2012, the Susitna River and its tributaries were visibly swollen, and water rested on floodplains along the rivers. (Turn on the image comparison tool to see the difference.) The lighter color of the river and streams likely resulted from sediment; during floods, fast-flowing rivers can carry heavy loads of mud and debris.

Another significant change between 2011 and 2012 was increased snow cover. According to local news reports, intermittent rains continued to fall after the severe rainstorm departed; but early on September 29, rain turned to snow. As MODIS passed overhead on the 30th, snow topped the mountain peaks both east and west of the river. The snow arrived earlier than usual, the Anchorage Daily News reported, as the average date for the first snowfall is October 17.

Compared to the previous year, late September 2012 also exhibited more intense shades of green, suggesting more robust vegetation. The greener shades might have resulted from recent moisture, but the precise angle of the satellite sensor as it passes over the region can make some areas look more or less green.

River levels had dropped somewhat by the time MODIS observed the region in 2012. While the storm was in progress, clouds covered the affected areas preventing MODIS from observing the damage.