The Bezymianny Volcano in Kamchatka, Russia 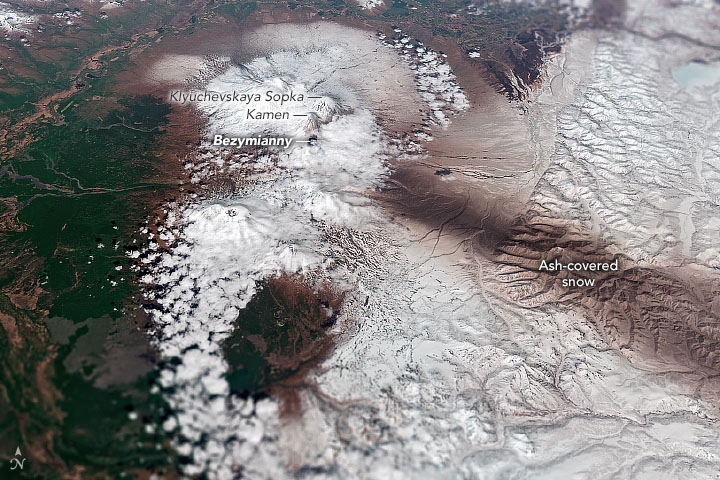 Today’s Image of the Day from NASA Earth Observatory features the Bezymianny Volcano on the Kamchatka Peninsula in Russia’s Far East. The volcano, which recently erupted on May 28, 2022, peaks at an elevation of 9,455 feet.

“The name, which translates to ‘no name,’ was likely bestowed because the stratovolcano had been quiet for a thousand years at the time it was named,” reports NASA. “Until late 1955, when it awakened with a cataclysmic eruption, the volcano was considered extinct. Bezymianny has been erupting intermittently ever since.”

According to NASA, an eruption of Bezymianny in 1955 was very similar to the 1980 eruption of Mount St. Helens, with a lateral flank explosion and summit collapse. During the recent eruption, observers at the Kamchatka Volcanological Station recorded a strong explosion and large ash plume.

“The ejected ash ultimately reached an altitude of 15 kilometers (9.3 miles) and traveled east-southeast for more than 1,600 kilometers (1,000 miles). As the plume drifted over the peninsula toward the Pacific Ocean, it deposited a layer of ash on the snow-covered ground,” says NASA.

“The streak of ash is visible in this image, acquired on May 29, 2022, by the Operational Land Imager (OLI) on Landsat 8. The image is overlain on topography data from the NASA Digital Elevation Model. Bezymianny is seen next to two larger neighboring volcanoes, Kamen and Klyuchevskaya.”