The Grand Ethiopian Renaissance Dam on the Blue Nile • Earth.com 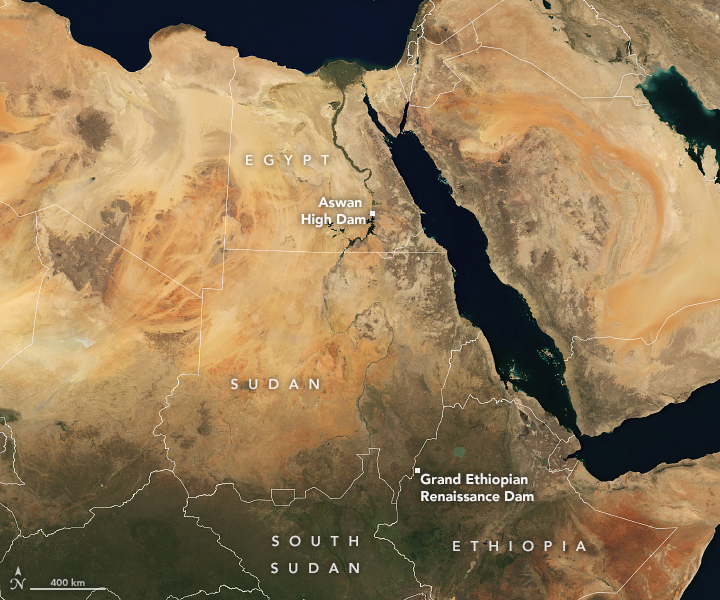 Today’s Image of the Day from NASA Earth Observatory features a dam on the Blue Nile that is set to become Africa’s largest hydroelectric dam upon its completion in 2023.

In Ethiopia, only about half of the citizens have access to electricity. To address this issue, the government launched the dam project in 2011.

“With three spillways and 13 turbines, the concrete structure will rise 475 feet and create a reservoir that will cover 724 square miles of land, an area about the size of Houston, Texas. Called the Grand Ethiopian Renaissance Dam (GERD), it should more than double Ethiopia’s output of electricity,” reports NASA.

Beyond generating electricity, GERD is expected to reduce destructive seasonal floods in Sudan, provide a more reliable supply of water for irrigation, and extend the lifespan of other dams by trapping sediment.

At the same time, however, the dam could potentially impact millions of people who live and farm downstream in Egypt and parts of Sudan.

“After 10 years of construction, GERD is almost complete. In 2020, water managers started filling the reservoir, a process that could take from a few years to a decade depending on weather conditions and how much of the Blue Nile’s flow the dam managers hold back,” says NASA.

“Ethiopia has an incentive to fill the reservoir quickly to start generating power and start paying for the $5 billion dollar project. However, rapid filling could significantly reduce the water downstream since the Blue Nile provides 60 percent of the water that flows into the Nile.”

Essam Heggy is a NASA Jet Propulsion Laboratory scientist who recently co-authored a study analyzing the potential hydrological and economic consequences of filling the dam at various rates.

“While the dam will certainly have positive effects in regards to flood control and hydroelectric power, there are important unanswered questions about how quickly the reservoir should be filled, and how it will be managed long term,” said Heggy.

“Filling the reservoir too quickly – in less than seven years – could lead to measurable water shortages downstream that impact food production, especially if the initial filling occurs under drought conditions.”