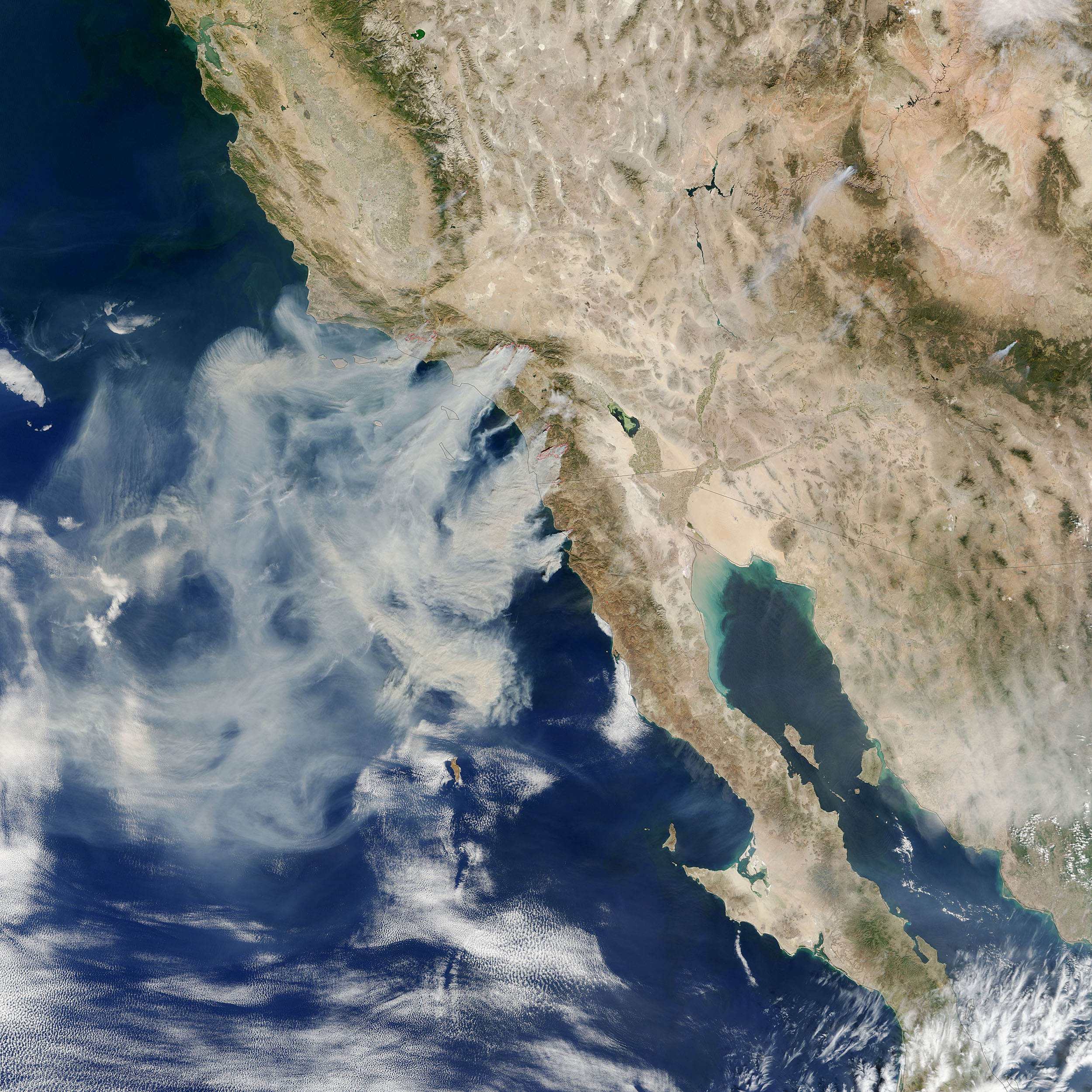 In the fall and winter, dry northeasterly “Santa Ana” winds sweep across southern California with a vengeance, pelting coastal areas with dust storms and fanning wildfires. In a new study, a team of scientists has detailed just how destructive Santa Ana fires are in comparison to summer wildfire. The Split Personality Of Santa Ana Fires have caused so much damage.

While Santa Ana fires can occur any time between October and April, they are most common in October, when the weather is dry and a pressure gradient builds up between the Great Basin to the east and the cool Pacific Ocean to the west. The weather pattern sends gusty, dry winds streaming down the lee side of inland mountain ranges and toward the coast. (Meteorologists call this wind pattern a foehn wind; Santa Ana is a regional name for foehn winds with an etymological history discussed here.) In contrast, non-Santa Ana fires generally burn farther inland during heat waves between June and September.

The images above, both acquired by MODIS, are examples of a Santa Ana fire (top) and a summer fire (bottom). In October 2003, powerful Santa Ana winds with gusts over 30 miles (50 kilometers) per hour fueled the Cedar fire.Ignited by a hunter on October 25, 2003, the fire destroyed 2,800 structures and caused 15 deaths within a week. The top image shows vast plumes of thick smoke streaming southeast from the Cedar Fire on October 26, 2003. Red outlines indicate hot spots where the sensor detected unusually warm surface temperatures associated with fires.

The second image shows the Zaca fire, a summer blaze that charred 240,000 acres in Santa Barbara county between July 4 and October 29, 2007. Despite burning for two months and costing $118 million to suppress, the Zaca fire resulted in one structure loss and no deaths. Note the southwesterly winds pushing smoke inland rather than toward the coast.

According to the new research, summer fires tend to last longer, accounting for 70 percent of all fire-suppression costs. The researchers also noted that roads, younger stands of trees, and ridge lines were more effective at stopping summer fires than Santa Ana fires. Such findings could have an impact on how firefighters plan prescribed burns (to reduce fire risk) and how they deploy resources once fires are burning.

“The large economic and human impacts of Santa Ana fires raises the question of whether more resources during fall could be marshaled for suppressing these fires,” said James Randerson, a study coauthor and a professor at the University of California, Irvine.

After analyzing decades of computer data, the researchers turned to computer modeling to project how climate change might affect the two types of fires by the mid-21st century. They project that the area burned by Santa Anna fires will increase by 64 percent, and the area burned by summer fires will increase by 77 percent, mainly due to drier winds.

“Right now, the effect of the fall Santa Ana winds on fire leads to a strong sense of there being a ‘fire season.’ The future increase in the non-Santa Ana fires in the summer will make the fire season start much earlier,” notedcoauthor Alex Hall of the University of California, Los Angeles.