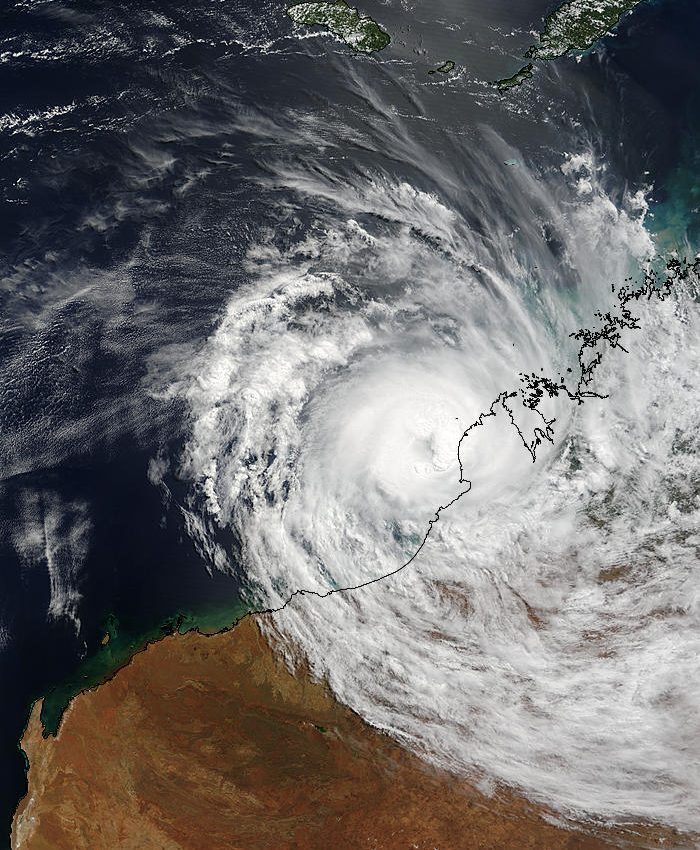 Severe Tropical Cyclone Fay continues to skate down the Western Australia coast. The storm has intensified over the past twenty-four hours. Also it is now expected to move ashore early Saturday morning. Therefore Australian Bureau of Meteorology has ranked Fay a Category 4 storm, a category reserved for storms with maximum wind gusts ranging between 225 and 279 kilometers per hour (140 and 173 miles per hour).

The Moderate Resolution Imaging Spectroradiometer (MODIS) on the Aqua satellite captured this image of Fay on March 26, 2004, at 5:55 UTC, 1:55 pm in Western Australia. The high-resolution image provided above has a resolution of 500 meters per pixel. The image is available in additional resolutions, including MODIS maximum resolution of 250 meters per pixel. Therefore Tropical Cyclone Fay has caused massive damage in the area. While no fatalities were reported, the cyclone brought record-breaking rainfall to Australia, which led to a sharp decrease in the country’s gold output. The cyclone also caused minor damage in the Pilbara region of Western Australia. In the spring of 2005, the Australian Bureau of Meteorology retired the name Fay from use, and it will never be used again as a cyclone name.