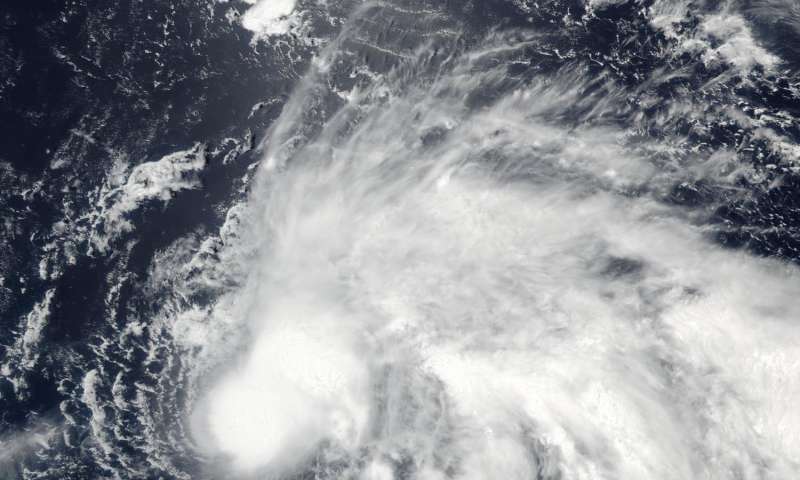 From July 11 to July 18, 2010, Conson varied in strength from a typhoon to a tropical depression. By the time the storm approached Vietnam on July 17, Conson had killed at least two people in China, and killed at least 68 people and left 84 more missing in the Philippines, according to ReliefWeb. CNN reported that Conson arrived on the heels of already severe flooding in southern China.
The Moderate Resolution Imaging Spectroradiometer (MODIS) on NASA’s Aqua satellite captured this natural-color image on July 17, 2010. The most intense clouds appear east and west of Hainan. The thick cloud mass over the Gulf of Tongking extends southwestward over parts of Vietnam, Laos, and Thailand. Thinner clouds, and clouds mixed with patches of clear sky, appear north, south, and east of the thickest cloud banks.
After making landfall in Vietnam, Conson was downgraded to a tropical depression. Typhoon Conson, known in the Philippines as Typhoon Basyang, was the second tropical cyclone during the 2010 Pacific typhoon season to impact the Philippines. Developing out of a tropical disturbance east of the Philippines on July 11, 2010, Conson quickly developed as it tracked nearly due west. Favorable environmental conditions, such as low wind shear and warm sea surface temperatures, allowed the system to intensify into a severe tropical storm by July 12.

Around the same time, the JTWC assessed the storm to have been equivalent to a Category 1 hurricane. The following day, Conson struck Quezon Province with winds of 100 km/h (65 mph) before weakening. After crossing the archipelago, the storm entered the South China Sea where it was able to re-strengthen. By July 16, Conson attained typhoon status as it neared the southern Chinese island of Hainan. After brushing the island at peak intensity with sustained winds estimated at 130 km/h (80 mph), the storm weakened in the Gulf of Tonkin due to less favorable conditions. The storm eventually made landfall near Ha Noi, Vietnam on July 17 and dissipated the following day.