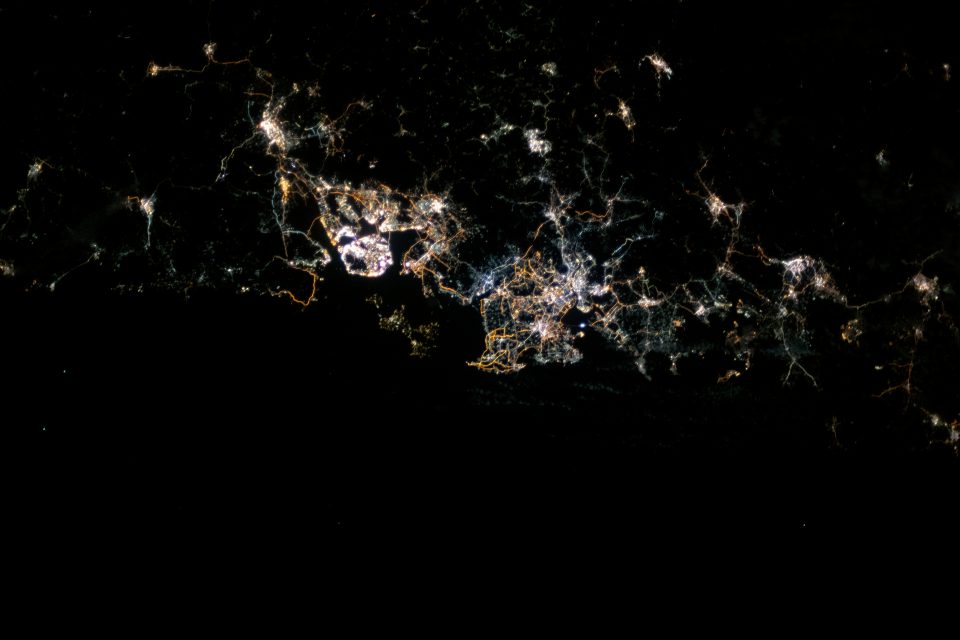 Today’s Image of the Day from NASA Earth Observatory features two Chinese port cities, Xiamen and Quanzhou, which stand out against the nighttime waters of the South China Sea.

As seen by the bright lights, several islands and small harbors near the coast make up one of China’s most highly trafficked port regions.

According to NASA, the ancient city of Quanzhou was once one of the most important ports along the Maritime Silk Road.

The photograph was captured on September 12, 2019 by an astronaut onboard the International Space Station (ISS).

The South China Sea is a marginal sea of the Western Pacific Ocean. It is bounded in the north by the shores of South China (hence the name), in the west by the Indochinese Peninsula, in the east by the islands of Taiwan and northwestern Philippines (mainly Luzon, Mindoro and Palawan), and in the south by Borneo, eastern Sumatra and the Bangka Belitung Islands, encompassing an area of around 3,500,000 km2 (1,400,000 sq mi). It communicates with the East China Sea via the Taiwan Strait, the Phillipine Sea via the Luzon Strait, the Sulu Sea via the straits around Palawan (e.g. the Mindoro and Balabac Strait), the Indian Ocean via the Strait of Malacca, and the Java Sea via the Karimata and Bangka Strait. The Gulf of Tonkin and Gulf of Thailand are both part of the South China Sea, and its shallow waters south of the Riau Islands is also known as the Natuna Sea.

Sea levels, ocean heat, and emissions hit record highs last year
News coming your way
The biggest news about our planet delivered to you each day