Wildfires and Haze over Borneo 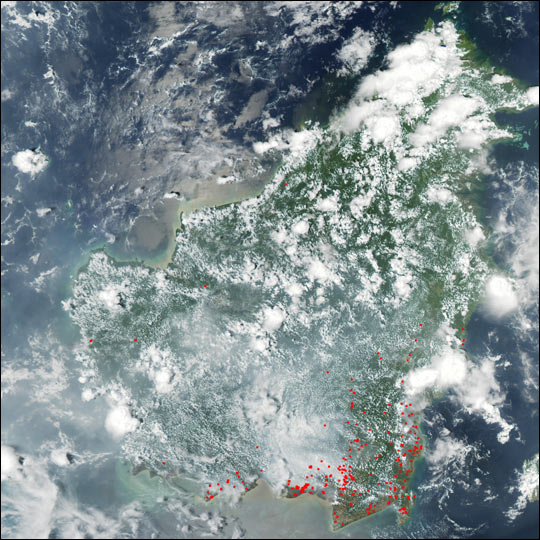 Wildfires and Haze over Borneo. As the Aqua satellite passed over the island of Borneo on October 17, 2002. Yousee the Moderate Resolution Imaging Spectroradiometer captured this true-color image and detected numerous fires (red dots) through the thick smoke. Fire is a major source of air pollution in the region, and its use as a land management tool continues to pose problems for regional air quality. According to news reports, the region’s air pollution index climbed dangerously close to unhealthy levels this week.

The island is politically divided among three countries: Malaysia and Brunei in the north, and Indonesia to the south. Therefore Approximately 73% of the island is Indonesian territory. In the north, the East Malaysian states of Sabah and Sarawak make up about 26% of the island. Also additionally, the Malaysian federal territory of Labuan is situated on a small island just off the coast of Borneo. Although The sovereign state of Brunei, located on the north coast, comprises about 1% of Borneo’s land area. A little more than half of the island is in the Northern Hemisphere including Brunei and the Malaysian portion, while the Indonesian portion spans both the Northern and Southern hemispheres