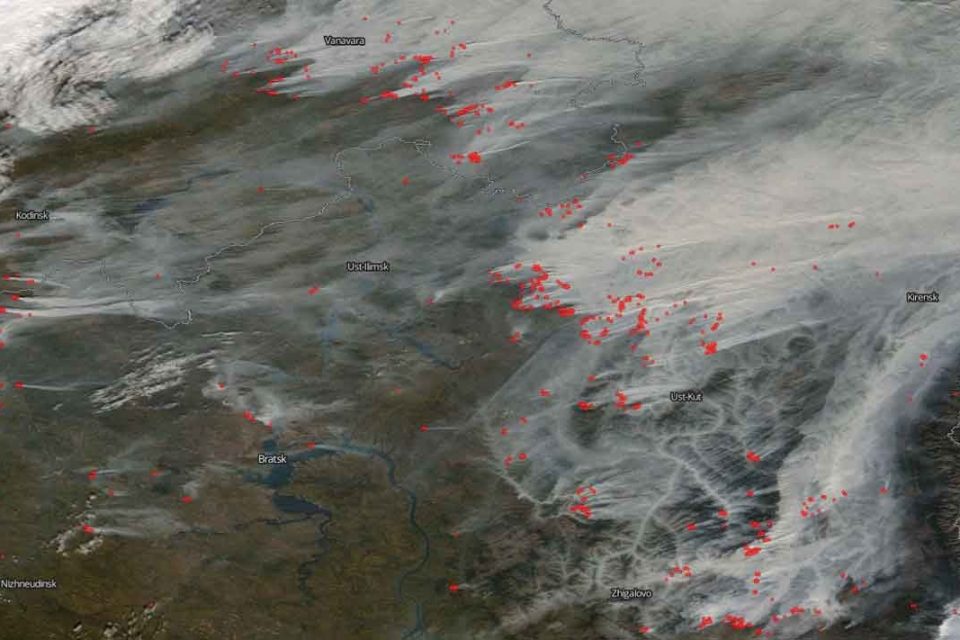 The summer of 2012 has proven to be the most severe wildfire season Russia has faced in a decade. Unlike 2010, when severe fires raged in western Russia, most of the fires in 2012 have burned through taiga in remote parts of eastern and central Siberia.
On September 11, 2012, the Moderate Resolution Imaging Spectroradiometer (MODIS) on NASA’s Aqua satellite captured this image of fires burning in Tomsk, a region of south central Siberia where severe wildfires have burned throughout the summer. Thick smoke billowed from numerous wildfires near the Ob River and mixed with haze and clouds that arrived from the southwest. Red outlines indicate hot spots where MODIS detected the unusually warm surface temperatures associated with fires.
More than 17,000 wildfires had burned more than 30 million hectares (74 million acres) through August 2012, according to researchers at the Sukachev Institute of Forest in the Russian Academy of Sciences. In comparison, 20 million hectares burned last year, which was roughly the average between 2000 and 2008, according to an analysis of MODIS data published in 2010.
Another way to gauge the severity of a wildfire season is to consider the smoke emissions. Fires emit a range of gases and particles into the atmosphere that can be detected by ground-based, aircraft, and satellite instruments. The two most common emissions are carbon dioxide and water vapor; however, incomplete combustion also generates carbon monoxide, an odorless and poisonous gas. In fact, fires are the source of about half of all carbon monoxide in the atmosphere.
Though ground and aircraft sensors provide the most accurate measurements of carbon monoxide for a localized area, satellites offer the best way to monitor wildfire emissions over broad regions, particularly in remote areas where there are fewer ground-based instruments. Christine Wiedinmyer, a scientist at the National Center for Atmospheric Research, has developed a model that ingests MODIS observations of fires and combines them with other information about vegetation (such as the percentage of tree cover and the type of forest) to calculate the quantity of emissions.
In September 2012, Wiedinmyer used her model to calculate Russian fire emissions for every year dating back to 2002. She found that the amount of carbon monoxide produced in 2012 was significantly more than what was produced in 2010 and the second most in a decade. Through August 31, the model showed that Russian wildfires had released an estimated 48 teragrams of carbon monoxide since the beginning of 2012. By comparison, the model estimated fires yielded just 22 teragrams of carbon monoxide in all of 2010.
Only one year—2003—had higher overall emissions. In that year, when severe fires burned in eastern Russia, wildfires produced an estimated 72 teragrams of carbon monoxide.