The first signs of winter for the Andes mountains • Earth.com

The first signs of winter for the Andes mountains 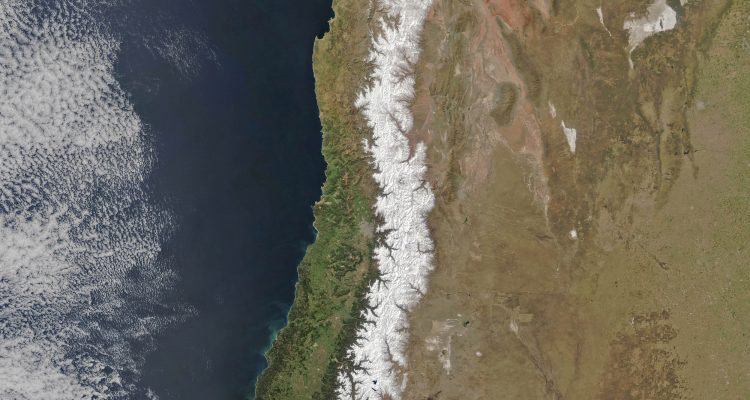 Snow and ice paint the Andes mountains as the southern hemisphere sees the first signs of winter.

The Andes are the longest series of mountain ranges the world, spanning around 4,500 miles and running through seven countries. The segment captured in this image shows around a 750-mile range in Chile and Argentina.

Aconcagua, the highest mountain in the southern hemisphere, is visible in Argentina, its peak rising 22,841 feet above sea level.

The winter season began with little precipitation, compounding the effects of a multi-year drought in and around Santiago. In mid-July, however, a large storm dumped as much as 3 meters (10 feet) of snow in the mountains northeast of the city. Smaller accumulations were recorded elsewhere in the range.

The snowpack that accumulates in the mountains each winter is the primary source of water for communities at lower altitudes. Streams deliver the meltwater to areas of central-western Argentina and central Chile, where it is particularly important for cities’ water supply, power generation, and agriculture. The Intergovernmental Panel on Climate Change has raised concerns that frozen areas in the Andes are generally reducing, which means streams are delivering less water to Chile and Argentina.