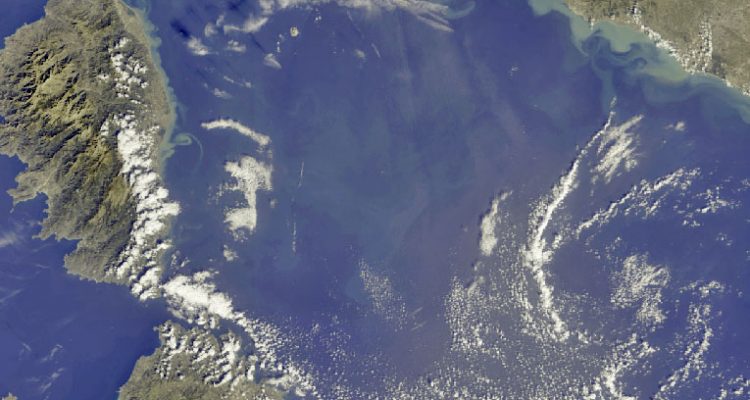 This image of the western Mediterranean Sea was taken by Sentinel-3A’s Ocean and Land Colour Instrument on October 16, 2016.

The islands of Corsica and Sardinia can be seen in the west with coast of Tuscany and the island of Elba to the northeast.

The waters along the east coast of Corsica and along the Italian coast are colored by discharge from the land following recent heavy rainfall. The Mediterranean Sea is a sea connected to the Atlantic Ocean, surrounded by the Mediterranean Basin and almost completely enclosed by land: on the north by Western and Southern Europe and Anatolia, on the south by North Africa, and on the east by the Levant. Although the sea is sometimes considered a part of the Atlantic Ocean, it is usually referred to as a separate body of water. Geological evidence indicates that around 5.9 million years ago, the Mediterranean was cut off from the Atlantic and was partly or completely desiccated over a period of some 600,000 years during the Messinian salinity crisis before being refilled by the Zanclean flood about 5.3 million years ago.

The western extremity of the Mediterranean Sea connects with the Atlantic Ocean by the narrow and shallow channel of the Strait of Gibraltar, which is roughly 8 miles (13 km) wide at its narrowest point; and the depth of the sill, or submarine ridge separating the Atlantic from the Alborán Sea, is about 1,050 feet (320 metres).