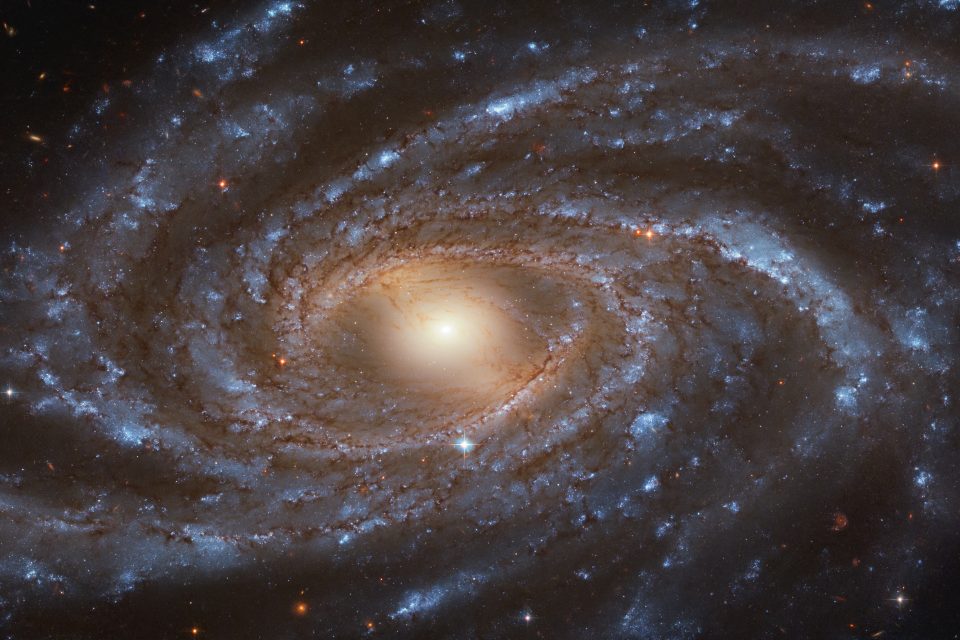 Young blue stars light up the spiral galaxy NGC 2336 Today’s Image of the Day from the European Space Agency features NGC 2336, a spiral galaxy that is 100 million light years from Earth in the constellation Camelopardalis.

The spiral arms of NGC 2336 are dotted with young, bright blue stars, while the stars in the central red portion of the galaxy are older. The galaxy is so large that it stretches across 200,000 light-years.

NGC 2336 was discovered in 1876 by German astronomer Wilhelm Tempel. The image was captured on by the NASA/ESA Hubble Space Telescope.

NGC 2336 is a barred spiral galaxy, featuring a small optical bar. At least 8 spiral arms, with numerous HII regions, emanate from the ring-like structure around the bar. This ring has a radius of approximately 34 arcseconds, which corresponds to 5.3 kpc at the distance of NGC 2336.

In the large arms of the galaxy have been observed 28 HII regions that may host young massive star clusters, and for two of them the nebular emission comprises most of the flux. Three of these HII areas have ages calculated to be 100 to 300 million years and have sizes between 300 and 600 parsecs. It is suggested they are star complexes that may coexist with younger ones. The most massive of the HII regions, number 13, has a mass estimated to be (550±169)×104 M☉ and is 2,600 ly (810 pc) across. Observations in the ultraviolet showed 78 star forming regions, with two them between the spiral arms and six at the galaxy ring. Their size is comparable to NGC 604, one of the largest nebulae in the Local Group. Star formation is more intense in the inner parts of the arms and at the ring