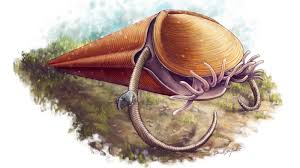 Everyone can relax. We finally know where the Hyolith sea creature belongs on the tree of life.

The first fossil of the ocean floor dwelling creature was discovered 175 years ago.  The mysterious animal, with its cone-shaped shell, tentacles, and appendages for walking, has eluded scientific classification until now.

Scientists say the Hyolith belongs to an invertebrate group that includes the horseshoe worm.

“Hyoliths are small cone-shaped sea dwelling animals. They are known from all around the world, mostly from fossils of their shells, “ Joseph Moysiuk of University of Toronto told BBC News.

Moysiuk analyzed more than 1,500 specimens excavated from rocks found in Canada and the U.S. to reach this conclusion about the animal’s classification.

“But the question of where Hyoliths actually fit into the tree of life has been somewhat of a mystery for the last 175 years, since they were first described.”

Hyoliths had long been assumed to be related to today’s common mollusks – like squid, octopus, clams, and snails. However, the new research published in the journal Nature suggests that they are more closely related to another group of organisms known as lophophorata, which also include lamp shells (brachipods).

Researchers involved in the study analyzed soft tissue preserved in fossils from a site called Burgess Shale in Canada.

“Being able to place them on the tree of life, it solves this long paleontological mystery about what these creatures are,” said Moysiuk.

He adds, “We have been able to discover some new features of a very old group of fossil animals, and it’s allowed us to reveal the evolutionary history of this group of animals and where exactly they sit on the tree of life.”

Dr. Martin Smith of the University of Durham, UK, also analyzed the fossils. He believes that understanding how the ancient creatures lived can offer insight into the impact of mass extinction events.

“Understanding the effects of such mass extinctions on ecology and diversity is particularly important as we seek to appraise and mitigate the implications of the current mass extinction event brought about by human activity,” said Dr. Smith.