A prehistoric bird had a tongue as long as its head • Earth.com 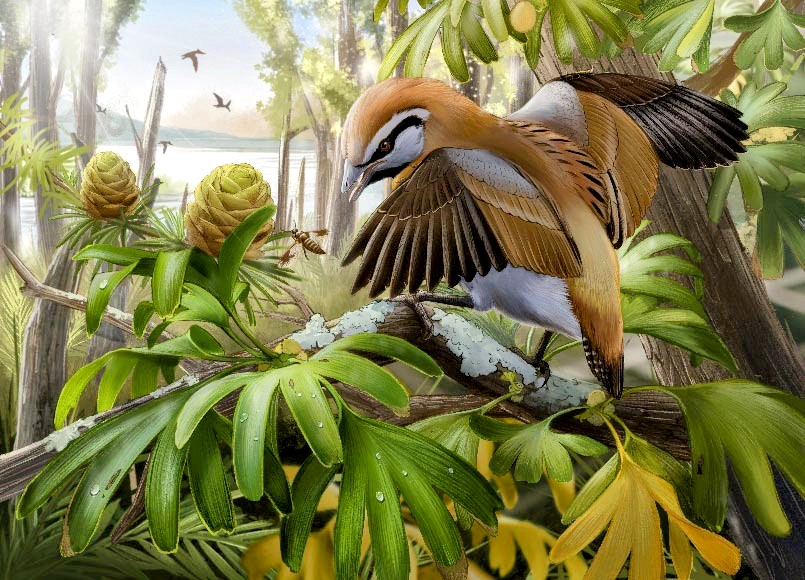 A prehistoric bird had a tongue as long as its head

A new study published in the Journal of Anatomy has described an extinct species of bird from Northeastern China that had a peculiar bony tongue nearly as long as its head. The bird lived among the dinosaurs over 120 million years ago.

Most reptiles and birds do not have large muscular tongues like humans. Instead, they have a set of rod-shaped elements made of bone and cartilage, located on the floor of their mouth. Some birds today, such as hummingbirds and woodpeckers, have a bony tongue as long or even longer than their skulls.

The newly discovered bird was baptized Brevirostruavis macrohyoideus (“bird with a short snout and big tongue”) by researchers from the Institute of Vertebrate Paleontology and Paleoanthropology (IVPP) of the Chinese Academy of Sciences and the University of Texas at Austin. It is part of an extinct group of birds called enantiornithines or “opposite” birds which were the most successful group of birds during the Cretaceous Period (between 66 and 145 million years ago). Moreover, it appears to be the earliest known example of a bird capable of sticking its tongue out.

According to the scientists, this ability may have helped the bird to catch insects in the same way in which today’s woodpeckers use their tongues to extract insects from holes in bark, wood, and tree branches. However, since no stomach contents were found with this fossil, the birds might have also been feeding on pollen or nectar-like liquids from the forests in which they lived.

“We see a lot of variation in the size and shape of the skulls of enantiornithine birds and that probably reflects the great diversity of the foods they ate and how they caught their food. Now with this fossil, we see that it’s not just their skulls, but their tongues that also vary,” said study co-author Dr. Wang Min, a paleontologist at IVPP.

“Animals experiment evolutionarily with what they have available. This bird evolved a long tongue using the bones it inherited from its dinosaur ancestors, and living birds evolved longer tongues with the bones that they have,” added study co-author Dr. Thomas Stidham, a paleoanthropologist at the same institute.

“This situation demonstrates the power of evolution, with birds using two different evolutionary pathways to solve the same problem of making a long tongue to stick out of their mouths,” he concluded.