When spiders unite: African social spiders live in large groups of up to 1,000 • Earth.com 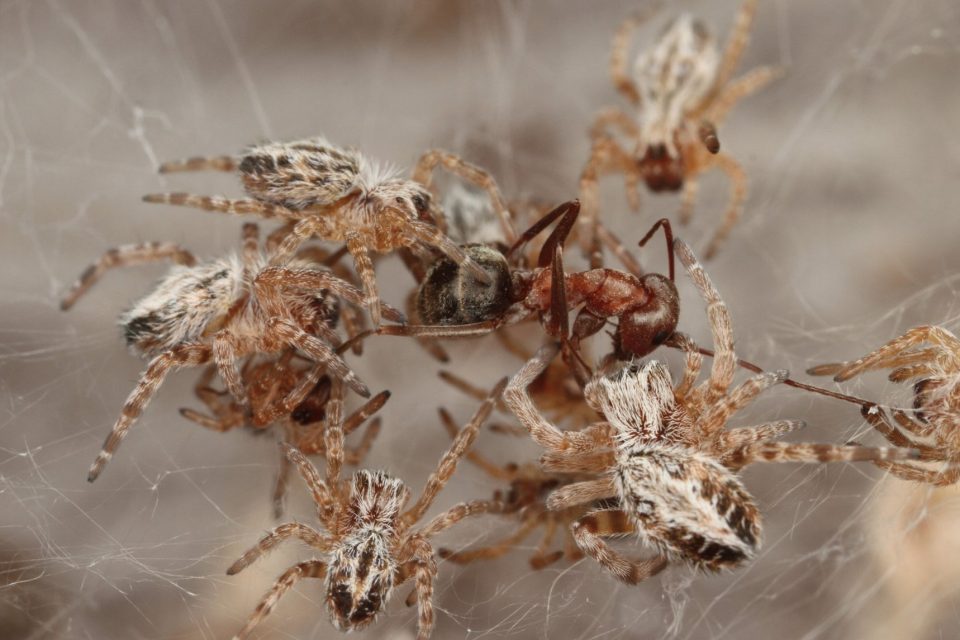 When spiders unite: African social spiders live in large groups of up to 1,000

We think of spiders as solitary creatures, hunched in their webs awaiting unfortunate flies or trekking solo up the living room wall on what we can only assume are nefarious errands. Shelob, the nightmarish arachnid antagonist of Lord of the Rings, is emblematic of these reclusive tendencies. Isolated in the caves of the Mountains of Shadow, she waits for passing elves, orcs, and hobbits to suck dry.

For arachnophobes, these antisocial tendencies are all to the good. One spider is really bad enough. Heaven forfend that they team up, as Shelob’s offspring do in the forests of Mirkwood. Up to 6% of the population is believed to have diagnosable arachnophobia and many of the rest of us maintain an irrational but nonetheless marked distaste for the creepy critters.

Of course, such fears are almost entirely baseless: very few spider species are threatening to humans and most are unlikely to even try to bite unless accidentally squished. The pleas of concerned arachnologists and other animal lovers have resulted in a renewed appreciation for these eight-legged predators, which provide invaluable ecological services by feeding on pest organisms. More householders are taking a humane approach to spider maintenance, coexisting with them or, at worst, gently moving them outside. There are now specialized tools for extracting them from inconvenient spots and relocating them.

But even the most ardent arachnid sympathizer might be hard pressed to resist reaching for a rolled newspaper in the face of the African social spider (Stegodyphus dumicola).

While their better-known cousins are lone wolves, these spiders live in groups. Enormous ones. Native to southern Africa, they form colonial webs containing up to a thousand individuals. An entire culture of weavers must have ticked off Athena some time in African prehistory. Unlike poor Arachne, for whom the class Arachnida is named, at least these guys have company. And, to some extent, they work together, creating an expansive web for food capture and a central chamber for rest and concealment.

Though these gossamer fortresses are intimidating to all but the most intrepid researcher, they present little challenge to the species’ main adversaries: ants of the genus Anoplolepsis. The dramatic antagonism between the spiders and the ants mirrors the well-documented wars between much larger African carnivores such as lions and hyenas. It is, however, more one-sided. When the ants descend en masse, they always win.

So how does spider society work? And how does social behavior play into the ancient conflicts between the spiders and their ant opponents? In a clade whose members are largely independent, this is a rich area of study. Enter Penn State evolutionary biologist Colin Wright and his colleagues.

Wright et. al. have journeyed to South Africa in search of answers. Braving the blazing Kalahari heat, not to mention their subjects themselves, they have shed new light on the evolution of sociality in these unique arthropods. In addition to their innate value, these revelations have implications for social evolution as a whole.

In a brand new study, the researchers have demonstrated that social spiders can actually learn from each other. They found that colonies experimentally isolated from their ant predators respond similarly to exposed colonies when a single new member who had experience with ants is introduced. That is to say: the entire colony is able to cue off of the cautious behavior of its new member and adjust its collective response accordingly—namely, a reduced willingness to exit the inner chamber when ants are detected. This suggests that, like other social invertebrates such as bees, social spiders can transmit information to each other to the benefit of the group as a whole. 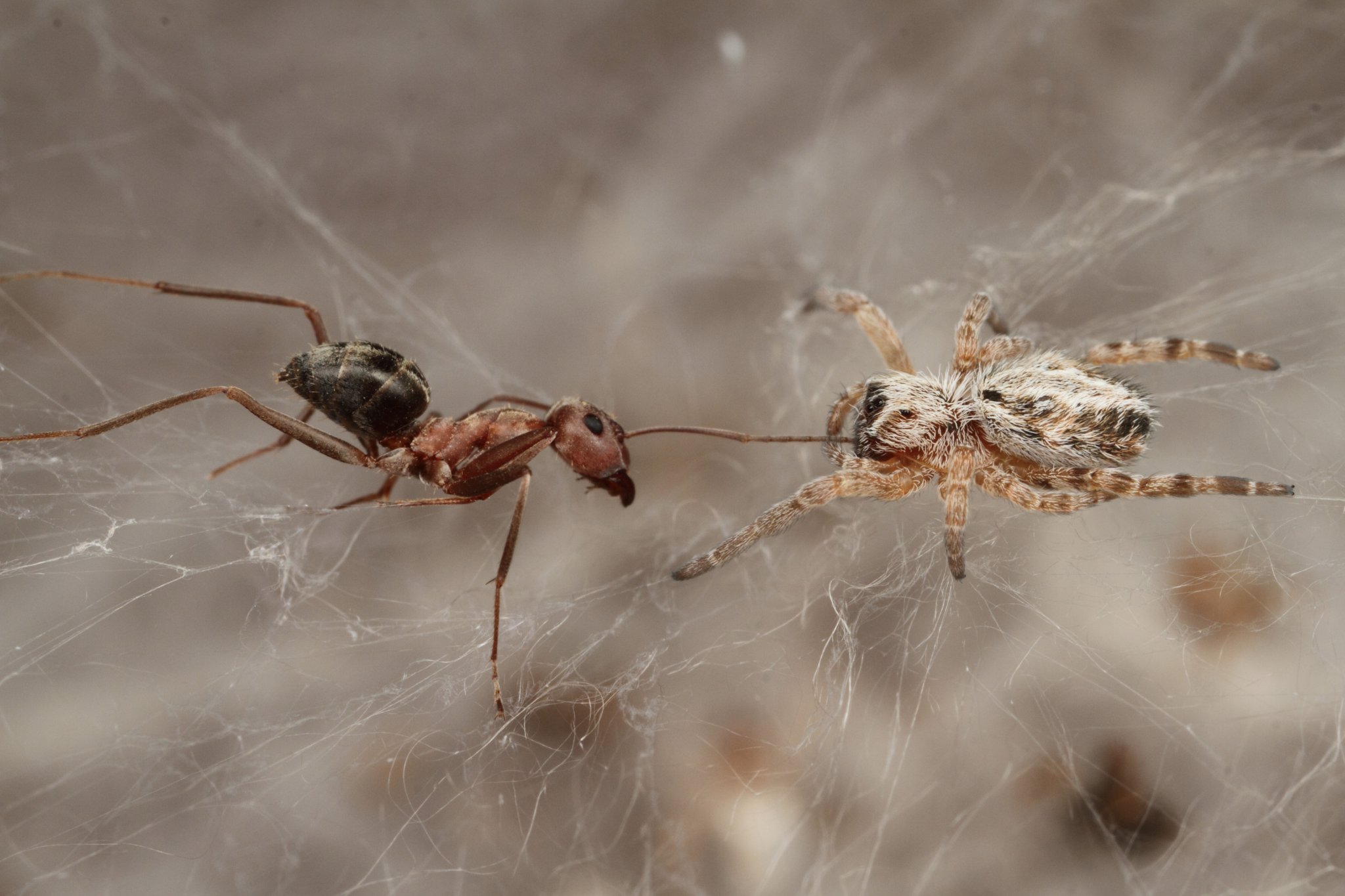 How exactly they do this is unknown. Says Wright, “My guess would be that the spiders can sense the identity of the ants by the types of vibrations they make on the webs. It could also be chemical as well, since one of my experiments showed that colonies reduce foraging even when exposed to chemical ant cues only. But in the open air, it might be more difficult to detect these chemical cues. It’s probably a combination of both.”

So, the ant-experienced spider may detect physical or chemical cues indicating the presence of ants and can then respond in behavioral or chemical ways that are perceptible to its naive nest-mates. They can act on this information—scuttling into their silky redoubt in the hopes of protection from the attack.

They have good reason to. These marauding ants tend to decimate social spider colonies when they find them. They climb into the acacias where the spiders build their nests, likely using pheromone trails to lay the war path for other colony members. Carnage ensues. Though the spiders’ social structure confers a variety of benefits, per a 2015 paper co-authored by Wright, the larger and more conspicuous the communal web, the more likely it is to be attacked by Anoplolepsis. The genus bears the common name of “pugnacious ants” and their aggression isn’t restricted to other arthropods.

Wright explains, “The predatory ants were rather nightmarish to deal with. We had to spray our boots with 98% DEET, or line them with sticky goop to keep the ants from climbing up our legs and biting and stinging us. These ants are large and blanket the desert floor, so working with them was extremely tough. They’re quite rabid!”

The spiders display a number of defensive activities in response to the presence of their hymenopteran enemies. Some members spin a particularly sticky type of silk at the periphery of the web in an effort to entangle them. Others pin down the legs of the first ants to breach their fortifications (see image). And once a full scale invasion has begun, the spiders retreat to their inner chamber or simply attempt to flee the inevitable massacre. Though spiders are able to cooperatively subdue individual ants, colonies are nearly always decimated by full-scale ant attacks. Their behavioral peculiarities reflect the significance of these epic conflicts.

Individual spiders exhibit one of two personality types: bold or shy. These are experimentally determined by exposing spiders to puffs of air that mimic the breath of avian predators and observing the length of time that it takes them to come out of defensive postures. Bold spiders are those that return to their normal activities more quickly. It is not known what causes spiders to exhibit one personality type or the other.

“Boldness does appear to be heritable to some degree, indicating some genetic predisposition,” notes Wright. “But we also know that individuals can shift their behaviors depending on the distribution of personalities around them. When we create colonies of entirely shy spiders, more spiders will increase their boldness. Shy spiders appear to be more behaviorally plastic in this regard. Shy spiders can become more bold, but bold spiders appear less able to become shy.”

The balance of personality types appears to affect the colony’s defensive and foraging activities. For example, colonies with greater numbers of bold individuals respond in greater numbers to prey items trapped in their webs. And, interestingly, shy spiders are actually the ones expected to shoulder much of the burden of ant capture. One might reasonably expect the bold individuals to be the ones to confront the species’ most dangerous enemy.

Unlike other social arthropods such as ants, bees, wasps, and termites, social divisions end at the personality level. “Social spiders do not have queens,” Wright explains. “There is no division of spider societies into reproductives and workers. Rather, all spiders cooperate in all tasks including reproduction and brood care.”

Interestingly, a 2016 paper co-authored by Wright found that colonies comprising a mixture of bold and shy individuals engaged in double the amount of defensive web-making than artificially assembled colonies containing only one personality type or the other. These colonies were at least temporarily more stable in the face of attack. “We tend to find that colonies that are composed of a mixture of personality types tend to outperform behaviorally homogeneous societies,” he expounds. “This is true for many social spiders and social animals generally, including humans.”

The interplay between the distinct personality types in this species is somewhat unusual in the several hundred species of social spider.

“The most striking difference in social Stegodyphus spiders is perhaps the phenomenon of having ‘keystone’ individuals,” says Wright. “Some individuals … act somewhat as leaders that catalyze others to participate in things like collective hunting and web repair. Other species seem to lack these leader-follower dynamics.”

These dynamics can be applied to the study of sociality and its complexities more broadly, even in humans.

According to Wright, “This has implications for computer AI in identifying keystones in human crowds during things like riots, or even fun human activities like sports. What makes an influential leader? Spiders may be able to tell us. It’s not guaranteed to translate to humans 1-to-1, but it allows us to understand what’s possible and apply our findings to other systems. Many corporations now use personality research to construct teams composed of personality phenotypes that are optimal for output and cooperation.”

Luckily, the parallels between human and spider society are mostly abstract and theoretical. We certainly wouldn’t want to take child-rearing tips from them. They feed their young, but not in the way you might think. The first repast of each generation of spiderlings consists of its own relatives  … mothers and aunts alike are consumed, the male ancestors having died before their offspring hatched.

All of this is probably enough to leave the sanity of the spider-averse hanging by a thread. But, like nearly all of its brethren, the African social spider poses a only a psychological threat. Unless of course you are a hapless insect trapped in its web. Then prepare for annihilation by an eight-legged mob.