Alaska earthquake highlights the importance of being ready • Earth.com 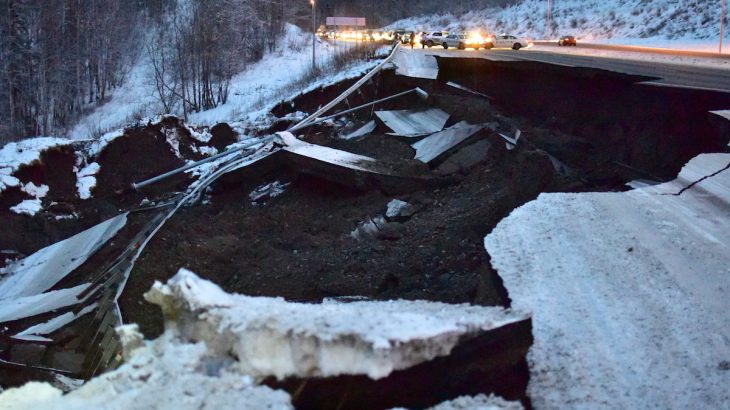 Alaska earthquake highlights the importance of being ready

In 1964, what later became known as the Great Alaskan Earthquake of 1964 tore into the northernmost US state.  The earthquake only lasted about 4 minutes but was the second longest recorded earthquake in the world, after one recorded in Chile in 1960, according to the Alaska Earthquake Center.

In that brief 4 minutes, the Great Alaskan Earthquake reached a magnitude of 9.2, according to NOAA.  The earthquake triggered a tsunami that hit the coast of Alaska with waves measured up to fifty feet high in places.  All told, 139 people died and 124 of those people were killed by the tsunami. The number of lives lost would likely have been even more if the earthquake had hit a part of the US with a greater population density.

History.com reports that witnesses remembered hearing crunching, grinding noises as asphalt rose and fell like ocean waves.  Sewer and gas lines were broken, electricity was interrupted. Landslides were triggered, in one area taking 75 homes with the moving earth.  Residual water movement was reported as far away as Australia. It was said that the tip of the Space Needle in Seattle Washington wobbled from the earthquake.

The coast of Alaska was forever changed.  I’ve seen places where sharp cliffs were created on Alaskan offshore islands showing the displacement of where the coast is now compared to where it was.  On Middleton Island, a ship that was once sunk just offshore now lies on its side on a patch of dry nest where its rotting remains house hundreds of nesting seabirds in its cavernous hold.  Some coastal forests were dropped below the sea and drowned in the ocean waters.

It was the danger of future earthquakes like the 1964 earthquake in Alaska that drove the creation of FEMA’s National Earthquake Hazards Reduction Program (NEHRP) and a stricter building code in Alaska.  Alaska itself is especially prone to quakes, averaging 40,000 earthquakes a year, with bigger quakes than the rest of the US combined.  NEHRP was established by Congress in 1974, directing that four national agencies coordinate their work on earthquakes to be complimentary.

Research carried out by the National Institute of Standards and Technology (NIST), the National Science Foundation (NSF) and the U.S. Geological Survey (USGS) would be used by other agencies to reduce earthquake hazards.  Implementation and development of earthquake programs would be shared by some of these agencies as well as FEMA.  Congress also allowed federal funding specifically for the reduction of earthquake hazards. It seems that despite such a bill being passed, we’re often doomed to repeat history; it’s just blind luck when the repetition isn’t as bad.

At 8:29 am, on November 30, 2018, another earthquake hit Alaska seven miles north of Anchorage.  This earthquake was only a magnitude 7 quake. Gas and water lines were broken, roads were torn apart but no fatalities were reported.  CNN reports that inspectors have been looking at 243 bridges in the area but have yet to find structural damage to any.  The Alaskan Earthquake Center, out of the University of Fairbanks, has a long list of recent earthquakes over the last few days.  Most of the quakes are minor, being in the 1-2 range but a few have reached magnitudes of 3 or 4, including a 4.8 magnitude quake 9 miles from Anchorage.  The timing of these earthquakes happens to come just after a bill to re-authorize NEHRP was passed from Congress to President Trump to be signed into law on the 29th of November.

The bill S.1768 was sponsored by Democrat Dianne Feinstein from California but also Republican senator Lisa Murkowski of Alaska.  The bill authorizes Congress to spend millions on earthquake programs, including funding for a USGS alert system. The last authorization for NEHRP expired in 2009 and funding has come in bits and pieces as short term bills have funded earthquake programs.  A fortunate inclusion in the bill is funding for tsunami preparedness, which bolsters Alaska, where a tsunami is likely to be more dangerous than an earthquake itself. The small amount of damage from the November 30 earthquake and smaller following quakes is due partly to the lack of a tsunami but also to preparedness.

The US Geological Survey (USGS) has already rolled out a prototype for its earthquake alert system.  Shake Alert, started phase 1 of its operation this fall.  The system currently serves California, Oregon and Washington.  Commercial and institutional uses already can use the system in a small way.  The early warning system relies on traditional seismometers to measure small seismic activity across the west coast and create a warning.  The next phase of the system should alert people to level 5 seismic activity. The USGS is already partnering with cell phone carriers and other mass alert systems to reach as many people as possible with early earthquake warnings.  So far, the system leaves out Alaska and the state already so far apart from the rest of the US must fend for itself.

Anchorage Daily News reported that strict building codes kept earthquake damage to a minimum.  Alaska and California have the hardest rules for building to withstand earthquakes.  Anchorage has a population of around 300,000 large enough that an earthquake of the size that hit at the end of November could’ve caused much bigger problems.  Alaska’s largest hospital initiated an incident command center but few people showed up with injury. About 50 sites showed road damage, but CNN reported that some of the roads are already repaired, partly thanks to federal dollars.  We can learn a lot from Alaska’s preparedness.

If Trump signs reauthorization of NEHRP into law, prevention rather than reaction will become the law.  Much work can still be done to include Alaska, the state with the most earthquakes, into the federal earthquake program.  We can also look to Alaska as a good example of disaster preparedness in general.