Alaska has more stores of carbon than rest of the US • Earth.com 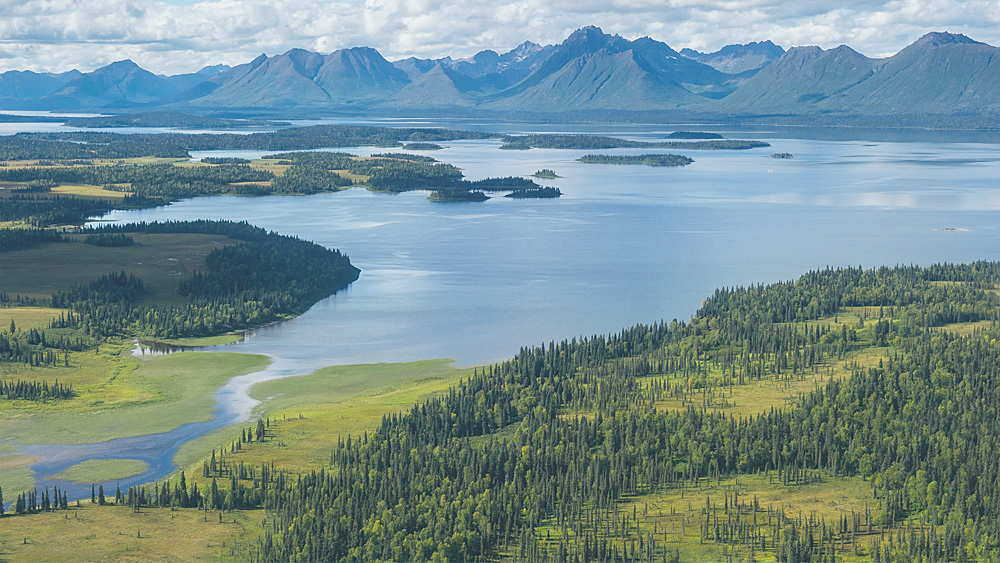 Alaska has more stores of carbon than rest of the US

Alaska has more stores of carbon than rest of the US. In comparison to the lower 48 states, Alaskan forests, wetlands and permafrost contain larger stores of carbon, according to the first-of-its-kind assessment recently completed by the U.S. Geological Survey, the U.S. Forest Service and the University of Alaska at Fairbanks.

“This benchmark assessment establishes significant baseline information to better understand carbon dynamics in Alaskan ecosystems,” said Interior’s Deputy Secretary Mike Connor. “It provides the latest example of how Interior is applying science to our nation’s most complex resource management challenges. Nowhere is this more critical than in Alaska with its vast and diverse geography and its heightened vulnerability to climate change.”

“Carbon stored in high latitude ecosystems is considered more vulnerable than carbon sequestered in ecosystems in the temperate zone,” said Virginia Burkett, USGS Associate Director for Climate and Land Use Change, “because average temperatures are projected to increase faster in the boreal and arctic regions during the remainder of the century.”

“This new assessment specifically reveals how soil carbon losses in Alaska are amplified by wildfires, which have increased in size and frequency with the warming Arctic climate,” Burkett noted.

Biological carbon storage – also known as carbon sequestration – is the process by which carbon dioxide (CO2) is removed from the atmosphere and stored as carbon in vegetation, soils and sediment. The USGS inventory estimates the ability of different ecosystems to store carbon.

“The cold temperatures of Alaska have led over time to the storage of vast quantities of soil and biomass carbon,” said A. David McGuire, USGS scientist and professor of land ecology at the University of Alaska Fairbanks. “A major concern for this region is how interactions among warming temperatures, permafrost thaw, more frequent wildfires, and changes in stream flow will affect carbon storage and greenhouse gas exchange.”

Presently, Alaska’s varied ecosystems act as a moderate carbon sink overall, absorbing about 3.7 million metric tons per year from the atmosphere. Even with increased permafrost thawing and more frequent and intense wildfires, future climate models show the ability of Alaska’s ecosystems to store carbon is projected to increase during the remainder of the century. This increased ability to sequester carbon is expected to occur due to increased vegetation growth prompted by longer growing seasons and other more favorable conditions. The increased vegetation growth more than counteracts increased carbon emissions from wildfires, a finding that may appear somewhat surprising.

The assessment indicates climate change will affect different ecosystems in Alaska in different ways, weakening the boreal forest as well as boreal and arctic wetlands’ ability to sequester carbon while strengthening sequestration in Alaska’s southeast forest region. Most of the total Alaska carbon stock — over 91 percent (estimated to range between 37 and 76.9 billion metric tons) — resides in soils and permafrost. From one-third to two-thirds of the state is underlain by near-surface permafrost.

Although wildfire activity varies widely from year to year, an overall upward trend in the incidence and size of wildfires is projected to increase during the remainder of the century with the boreal region of the state to be most severely affected, diminishing its capacity as a carbon sink.

A separate study conducted as part of the assessment shows that the permafrost extent could shrink by up to 25 percent by 2100, which could potentially lead to consequences such as altering landscapes, hydrology, biomes, and fire resiliency.

The assessment estimated methane emissions for wetlands in the boreal and arctic regions, indicating that the state’s wetlands are a significant source for greenhouse gas forcing potential in both the near and long-term future.

On the other hand, southeast Alaska is a productive forest region that serves as a carbon sink. The assessment estimates that the productivity of this region would increase under a scenario of climate change and forest management by 8 to 27 percent.

The assessment further projected that a substantial proportion of the spruce forests of the boreal region could be gradually replaced by birch and aspen forests. This would mean shifting habitats for wildlife and migratory birds.

The Alaska investigation constitutes the latest chapter of a nationwide study that Congress mandated for the Department of the Interior in 2007 under the Energy Independence and Security Act. Regional biologic carbon sequestration assessments for the 48 contiguous states have been published previously. Historically, national inventory assessments about carbon stock and greenhouse gas levels have not included Alaska because of its sheer size, relative lack of transportation infrastructure, and low density of field data. This extensive assessment of Alaska’s land carbon stocks is the first such study for the state and fills an important knowledge gap about carbon and greenhouse gas emissions.

“We continue to refine our knowledge of land carbon dynamics,” Burkett observed. “It is absolutely vital that we pursue a field-based understanding of the carbon cycle of the Earth in various settings so we can better understand both the natural and the human-influenced mechanisms of climate change. This assessment was based on the best available data from field surveys, remote sensing, authoritative maps, and model simulations.”

The Alaska assessment results help identify additional scientific investigations that will contribute to refining the outlook for climate change in Alaska in relation to land management actions. Two examples of needed further scientific inquiry are (1) the feedback mechanisms of a changing climate that interact with carbon pools found in the boreal and arctic regions and (2) an assessment of the consequences of climate change to wildlife, to migratory birds, and to Alaska natives who depend on the timeless continuity of ecosystems.

The USGS publication, Baseline and Projected Future Carbon Storage and Greenhouse-Gas Fluxes in Ecosystems of Alaska, is now available online. McGuire and USGS colleague Zhilang Zhu were co-lead authors of the report. The lead authors have prepared an auxiliary set of slides that highlight key findings and statistics of the assessment.