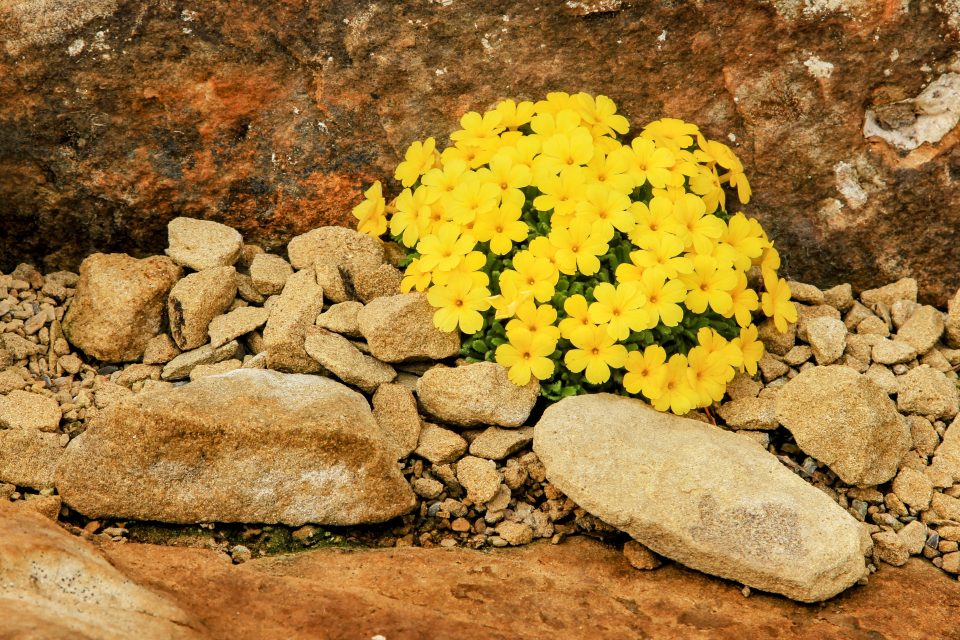 Usually, when a plant cell is pierced, it pops like a water balloon. This is why researchers were baffled about the long strands of flavonoid “wool” coming from inside the cells of an alpine cushion plant with pretty yellow flowers known as Dionysia tapetodes.

“The leaves are covered in tiny hairs called trichomes. Each trichome has a spherical shaped glandular cell at the end – like a stalk with a single round cell at the tip – and we could see the threads emerging straight out of the glandular cell,” said study co-author Dr. Raymond Wightman. “But we know that plant cells are surrounded by a cell wall that protects and retains pressure within the cell. Poking holes through the cell membrane and cell wall would cause the cell to burst – like puncturing a water balloon.”

According to study co-author Paul Aston of the University of Cambridge, many alpine plants have interesting adaptations.

“The woolly farina threads seem to cover the entire leaf surface with long threads even connecting leaf-to-leaf,” said Aston. “Nobody knew what this wool was or how it was made and so we thought that this would be an interesting specimen to study.”

“There are many things that plants make that we do not yet know about – this is especially true for alpine plants where we see many unusual adaptations to the harsh high altitude environments they live in.”

Part of the Primula family, the plant is native to the rugged mountains of Turkmenistan, part of Iran and the border between Afghanistan and Pakistan. Other members of its family have leaves covered in a powder of flavonoid “dust” thought to perhaps be related to the hair-like strands of wool found on Dionysia tapetodes.

The flavonoids are important for plant metabolism but D. tapetodes lacks flavonoid powder, instead being covered with very fine strands a fraction the thickness of human hair.

Using advanced electron microscopy techniques, the Cambridge team looked closely at the hairs emerging from the cells and discovered a tiny gap in cell walls allowing the hairs to breach the walls.

“The plant manufactures the fiber inside the cell and then threads it through the gaps that are just wide enough for it,” said study co-author Dr. Matthieu Bourdon.

It is not yet known what purpose this ‘wool’ serves but scientists suspect it to be an adaptation to the harsh alpine environment that the plant is found in, whether for cold or to block UV radiation. There is still much not known about this plant and its novel adaptations.

The study is published in the journal BMC Plant Biology.