Amazon fires could have long-lasting and devastating impacts • Earth.com 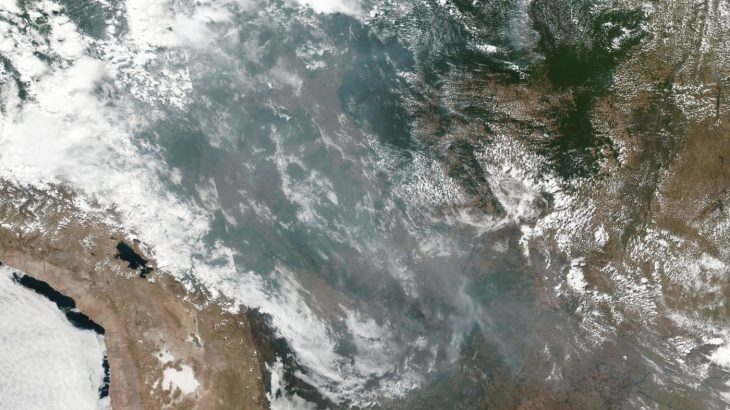 Amazon fires could have long-lasting and devastating impacts

The Amazon Rainforest is the largest tropical forest on Earth and is connected to the longest river in the world, the Amazon River. Older figures claimed the Nile was longer and some geographers still dispute which river is truly longest.

Newer research has found the Amazon to be 4,225 miles long, outstretching even the Nile, according to National Geographic. The Amazon is undisputedly the largest river in the world by volume, containing 20% of the earth’s fresh water. According to WWF, the Amazon River accounts for 15 to 16% of total river discharge into the world’s oceans.

This water is important because it carries nutrients from the plants, animals, fungi and minerals in the forest far out into marine ecosystems. The Amazon itself holds enormous amounts of carbon and creates oxygen as well as fresh water but it also supports life in the oceans. Plankton, besides being food for whales and other marine animals, produce most of the earth’s oxygen. According to EOS, plankton produce about 80% of earth’s oxygen.

Of course, the Amazon rainforest itself is also extremely important. The forests surrounding the river have long supported stunning biodiversity and unique, isolated human cultures. The Amazon rainforest holds at least 10% of the world’s biodiversity. Familiar animals like jaguars and armadillos that have wandered as far as the southwestern US live in the Amazon. There are also strangely patterned freshwater stingrays with colorful spots reminiscent of butterflies, frogs whose tadpoles live on mother’s back in high humidity.

There are also vines with mind bending hallucinogenic properties and the fiber producing kapok tree sacred to the Maya.

The Amazon is a literal manifestation of so much of the bright and dark beauty lingering in the shadowy corners of the human consciousness. The Amazon is indescribably beautiful and a thing unto itself. But now, the Amazon is burning like never before.

The Washington Post reports that the Brazilian Amazon has experienced an 85% increase in fires since January compared to last year. There have been 74,115 fires in the Amazon since January. The fires of course come during the Amazon’s dry season, which is only slightly drier than usual. The climate of the Amazon this year is actually well within normal ranges.

The cause of the increase in fires seems to be traced to humans. Most of the Amazon’s fires are caused by people, clearing land for agriculture or other activities that create fires on purpose or by accident. The fires were so large this year that 1,700 miles away, the sky over the city of São Paulo was blackened as if day turned to night for about an hour. The smoke was far reaching to the point that it can be seen from space.

The Brazilian state of Amazonas has already declared a national emergency due to the urgency of the fires there. Amazonas is the fourth most affected state in Brazil by the fires. The peak of fire season in Brazil comes in September so the fires haven’t ended yet. No matter how many more come, the fires are part of a political shift in Brazil.

The fires are potentially connected directly to changes in policy in Brazil’s government and an increasingly friendly attitude towards deforestation fostered by president Jair Bolsonaro. Satellite photos from Brazil’s space agency show that in 2019, 3,700 square kilometers of forests have been removed in Brazil. This number represents a more than 88% increase in deforestation in June from the same month in 2018. Combined with other months, this means that deforestation in Brazil is well on its way to far surpass deforestation last year. The deforestation increases the likelihood of fires.

Interestingly, deforestation laws under Bolsonaro haven’t changed and people who clear more of their land than allowed by law can still face substantial fines. What has changed is the rhetoric. Bolsonaro has been outspoken on developing the Amazon and talks as if conservation is merely a stumbling block to progress. It’s thought that the increase in deforestation is merely from people clearing more land with less than adequate law enforcement intervention. The fires and connected deforestation are likely to have long lasting and widespread consequences in Brazil and perhaps the world.

The Amazon may be close to a tipping point. A recent report from George Mason University and Brazil’s National Institute of Science and Technology published in Science Advances shows that the Amazon generates about half of its own rainfall. This means that deforestation to a certain level could create a dangerous feedback loop, increasingly drying out the Amazon, causing more forest fires, fewer trees, and less and less rain. Business Insider calls this scenario a “Doomsday ‘Dieback’ scenario” in which the Amazon rainforest continues to spiral towards a drier savanna.

Scientists warn that the tipping point when we enter this terrible feedback loop may be close at hand. Factors like climate change and fires exacerbate the possibility of an ecological shift to a non-forest environment in the Amazon region. As little as 20 to 25% deforestation rates in certain parts of the Amazon could potentially trigger the ecological shift in certain regions. Some scientists have even suggested that recent large droughts may indicate that the Amazon is close to reaching its tipping point. The loss of the Amazon rainforest would be catastrophic locally as well as globally.

Amazon Aid Foundation reports that 25% of modern drugs come from plant compounds. Only a tiny portion of the enormous plant diversity in the Amazon rainforest has been tested for medicinal properties, leaving a huge potential. The cultural integrity and autonomy of indigenous and Caboclo cultures also depend on the survival of the Amazon, to say nothing of the plants and animals themselves.

To a degree survival on the Earth as we know it is dependent on the Amazon. When rainforest is burned, it ruins not only the potential for carbon capture but also directly releases carbon into the atmosphere. The destruction of the Amazon would only speed up and intensify climate change as well as damage oceans and regional fresh water supplies. The Amazon is an important part of the vast and intricate ecosystem we’re all connected to physically and psychologically.