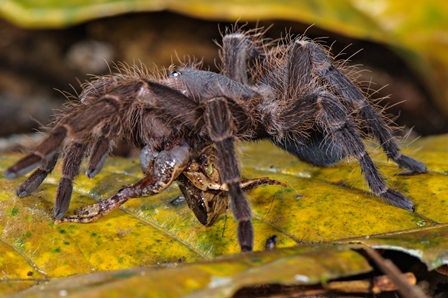 Imagine carefully walking through the Amazon Rainforest at night and seeing a dinner plate-sized tarantula dragging a small opossum across the forest floor?

Biologists from the University of Michigan were lucky enough to capture this remarkable example of Amazon rainforest predator-prey interactions and recently published a study documenting other similar examples of massive arthropods feasting on small vertebrates.

Not for the faint of heart, the study includes 15 documented instances of large arthropods, mostly spiders, preying on frogs, lizards, and even snakes in the Amazon.

Some of the highlights include a large scolopendrid centipede eating a live Catesby’s snail-eater snake and another centipede munching on a decapitated coral snake.

The tarantula/opossum observation is perhaps the most surprising and terrifying as it’s the first documented evidence of a mygalomorph spider preying on an opossum, which was confirmed by the American Museum of Natural History.

“We looked over, and we saw a large tarantula on top of an opossum,” said Michael Grundler, a co-author of the study. “The opossum had already been grasped by the tarantula and was still struggling weakly at that point, but after about 30 seconds it stopped kicking. We knew we were witnessing something pretty special, but we weren’t aware that it was the first observation until after the fact.”

The research, published online in the journal Amphibian & Reptile Conservation, examines a little documented source of mortality for Amazon vertebrates as they are preyed upon by spiders, centipedes, and even large water bugs.

Once or twice a year, a team of researchers from the University of Michigan and international collaborators survey the Los Amigos Biological Station in the remote Madre de Dios region of southeastern Peru to study the ecology of reptiles and amphibians.

The Amazon rainforest near the Andes Foothills is home an incredibly biodiverse ecosystem and spiders make up one of the most diverse groups of arthropod predators in the tropics.

The study details predator-prey observations from 2008, 2012, 2016 and 2017, and highlights not only the diversity of the ecosystem but also the remarkable variety of prey that arthropods hunt.

These types of arthropod predator-prey relations are not common outside of the Amazon.

“Where we do this research there are about 85 species of amphibians–mostly frogs and toads–and about 90 species of reptiles,” said Rudolf von May, the study’s first author. “And considering that there are hundreds of invertebrates that potentially prey upon vertebrates, the number of possible interactions between species is huge, and we are highlighting that fact in this paper.”