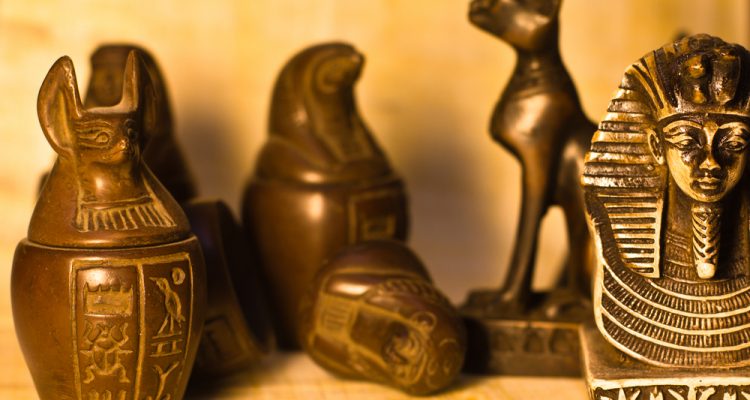 Archaeologists have uncovered a surprisingly modern find in the excavation of an ancient Egyptian town: a pet cemetery.

The cemetery is estimated to be about 2,000 years old, and holds the remains of scores of cats, along with dogs and monkeys.

Most of the pets were carefully buried, the archaeologists found – some still wearing their collars, with mats, vases, and in the case of two cats, ostrich-shell beads – indicating that the burials were deliberate and the animals were not thrown away.

The care that was taken with the animals’ burials shows a deep emotional connection between faithful Fluffy and Fido and their owners in ancient Egypt, said Dr. Marta Osypinska, who reported the researchers’ findings in the journal Antiquity.

The animals also seem to be pets rather than animals used in magical rituals like many of the animal burials in the Nile Valley, the researchers said.

While pet burials are not unusual in ancient Egypt, most previous finds have been pets buried alongside or near their owners. In the pet cemetery at Berenike, only two human burials were discovered, Osypinska said. The rest of the cemetery went to the dogs (and cats).

The archaeologists stumbled on the cemetery while they were excavating a trash site outside the Red Sea port town of Berenike. The pet cemetery dates to sometime in the first or second century C.E., when the town was under Roman control.

The town was always animal-focused, the researchers said, and originally served as a waystation for elephants headed between battlefields.

While Egyptians were known for their love of cats, Romans adored their dogs, and both are found in the pet cemetery.

One of the biggest surprises, the researchers said, is that Berenike is a remote town that would have relied on food imports. Even with the need to import food, one of the dogs found in the cemetery – a mastiff-type dog, probably imported from Greece or Rome, with advanced bone cancer – had a belly full of meat.

The pet cemetery is an unusual find, but animal cemeteries are found throughout ancient Egypt, often containing scores of mummified cats or dogs that were used in ritual purposes.

The pets in the Berenike cemetery show no signs of having their necks broken, a common find in the ritual animals’ cemeteries, Osypinska said. And though it was found near a trash site, the graves all show signs of deliberate burial and many have grave goods, she said.