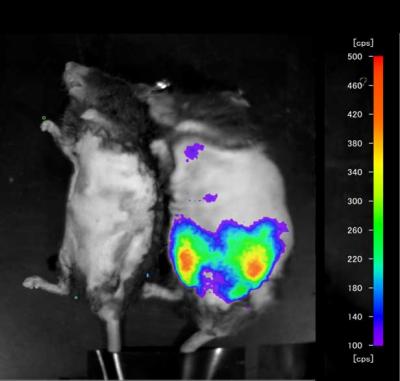 Associate Professor Noriyuki Yanaka from Hiroshima University worked with a team to develop a non-invasive method of testing the anti-inflammatory properties of fortified health foods and medications on mice. Their hope is that this procedure will change the way scientists conduct animal testing.

The research, published in the journal Nature, involved looking at inflammation of fatty tissues inside the body. Metabolic disorders such as cancer, Type-2 diabetes, and cardiovascular doses result in over-nutrition. The body fights this by releasing white blood cells. While this is meant to be a good thing, it can be problematic for obese fatty tissue, which becomes inflamed and damaged.

In order to study these tissues, scientists had to euthanize a large number of mice as they progressed through their research. Yanaka and his team have discovered a gene called Serum Amyloid A3 (Saa3) that can be detected when fatty tissue is inflamed.

They injected this gene into fertilized mouse eggs and created a batch of mice that could be examined in a non-invasive fashion to determine if their fatty tissue exhibited signs of inflammation. Scientists then divided the mice into two groups – feeding the first group a high-fat diet and the others a natural-wild diet. They were able to use bioluminescence to examine the fatty tissues of the mice, noting that the ones on the high-fat diet showed signs of inflammation, while the ones on the natural-wild diet did not.

Yanka said that the new method does not completely eliminate the need to euthanize lab mice, but hopes that it will cut known on the number of deaths. “What we are proposing is a way to reduce not only the number of animals which are used in experiments, but also animal experiments themselves,” he said.