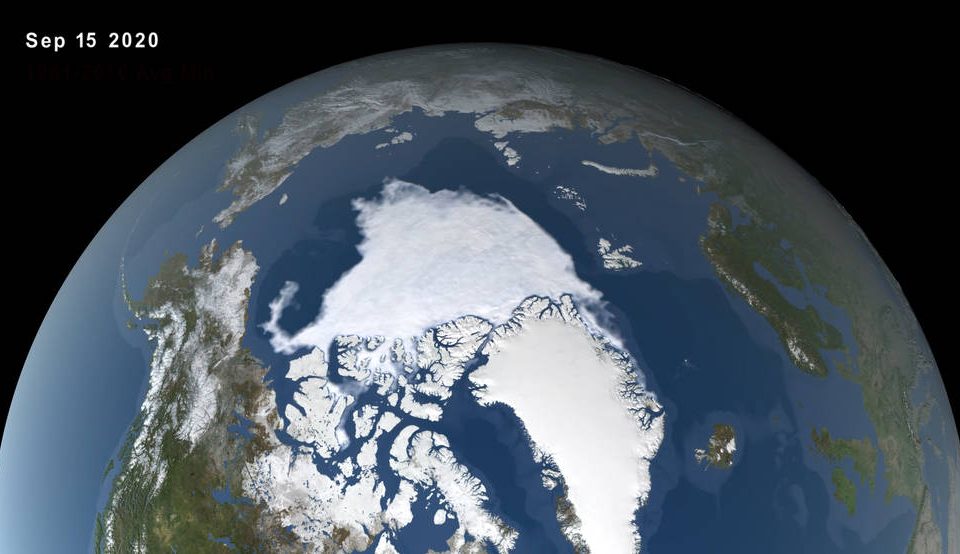 According to measurements by NASA and the National Snow and Ice Data Center (NSIDC) at the University of Colorado Boulder, the 2020 sea ice minimum is nearly a million square miles lower than the average minimum between 1981 and 2000.

Throughout the winter season, sea ice covers most of the Arctic Ocean and its neighboring seas. Fluctuations in Arctic ice cover are natural, but the extent of summer sea ice impacts local ecosystems, local and global weather patterns, and ocean circulation.

“The more we warm the world, the more frequent ‘bad’ ice years like this one will become, until they are all bad years and the polar bears are gone,” said Dr. Amstrup.

“Warming and sea ice decline don’t mean that every year will be warmer and have less ice than the previous, but rather that the long-term trend is for an ever-increasing frequency of hotter years with less ice – ultimately ending in an ice-free Arctic.”

The minimum extent of Arctic sea ice has dropped dramatically over the last two decades, with the lowest extent was recorded in 2012. This year, a Siberian heat wave triggered early melting, and Arctic temperatures persisted at 14 to 18 degrees Fahrenheit hotter than average.

“It was just really warm in the Arctic this year, and the melt seasons have been starting earlier and earlier,” said Nathan Kurtz, a sea ice scientist at NASA Goddard. “The earlier the melt season starts, the more ice you generally lose.”

“As the sea ice cover extent declines, what we’re seeing is we’re continuing to lose that multiyear ice,” said Serreze. “The ice is shrinking in the summer, but it’s also getting thinner. You’re losing extent, and you’re losing the thick ice as well. It’s a double whammy.”

The second-lowest extent of sea ice on record is just one of many signs of a warming climate in the north, said Serreze, pointing to the Siberian heat waves, forest fires, hotter-than-average temperatures over the Central Arctic, and the thawing permafrost that led to a Russian fuel spill.

“The Arctic is yelling at us to pay attention, with troubling signs from heat waves to massive sea ice loss,” said Dr. Labe. “This year’s sea ice minimum is part of a highly disturbing downward trend – one that will continue until the summer sea ice is gone unless we slow global warming by systematically reducing our greenhouse gas emissions.”