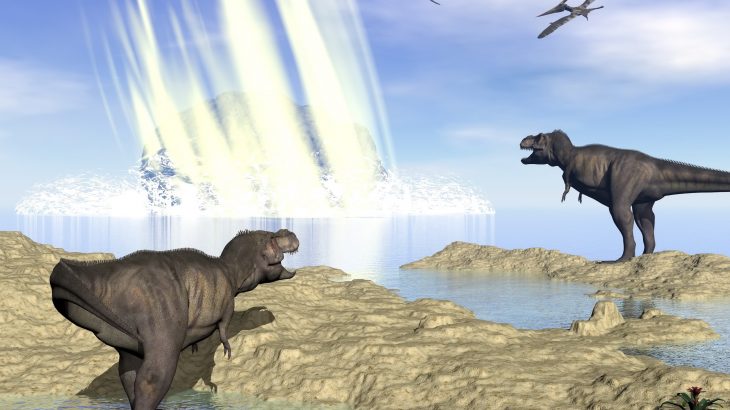 Asteroid that killed the dinosaurs caused a massive global tsunami

Beneath Mexico’s Yucatan Peninsula lies a 111 mile-wide crater called the Chicxulub crater that was formed after a giant asteroid collided with Earth 65 million years ago.

The aftermath of the collision included a nearly mile-high global tsunami and brought about the extinction of the dinosaurs and nearly three-quarters of all life on Earth.

New research recently presented at the American Geophysical Union‘s annual meeting in Washington, D.C. shows how much of an impact the tsunami had after the asteroid collided into the shallow waters of the Gulf of Mexico.

The research was conducted by a team from the University of Michigan.

“The Chicxulub asteroid resulted in a huge global tsunami, the likes of which have not been seen in modern history,” Molly Range, the lead researcher of the project, told Live Science.

According to Range, this is the first global simulation of the impact tsunami, and the researchers had to use two models to simulate the full global scale of the tsunami after the collision.

One model showed wave height and sediment displacement immediately following the impact and the second model showed how the tsunami spread through and displaced the world’s ocean in the hours after the impact.

“The impact tsunami spread quickly out of the Gulf of Mexico into the Atlantic and through the Central American seaway into the Pacific within the first 24 hours,” the researchers wrote.

Once the asteroid collided with Earth, the first model simulated what the next ten minutes were like near the collision site, and the model showed an initial wave reaching nearly a mile high flowing away from the crater.

The team used data from the first model to simulate how the tsunami propagated through the world’s oceans in the second model.

“We found that this tsunami moved throughout the entire ocean, in every ocean basin,” Range told Live Science.

Waves in the North and South Pacific reached as high as 46 feet after the initial impact tsunami wave, the model showed waves reaching 13 feet in the North Atlantic.

“This model suggests that the bolide impact not only had major effects on the global atmosphere and biosphere, it also created a tsunami of such magnitude that its effect is felt across much of the world ocean,” the researchers conclude.