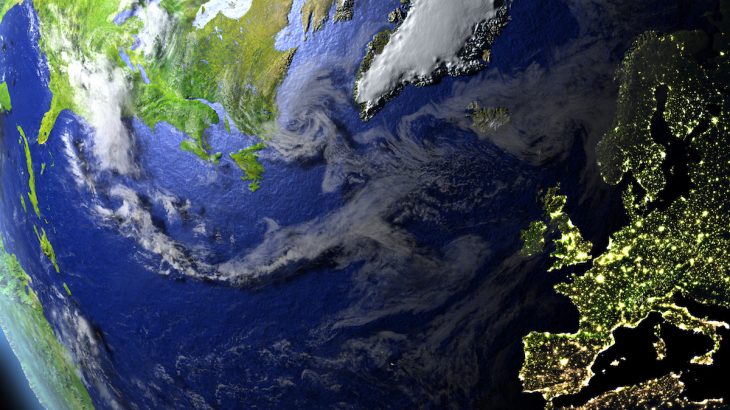 Planet Earth has undergone drastic periods of cooling and warming over its 4.5 billion year history.

As the age of the dinosaurs was coming to a close 34 million years ago, Earth switched from a warm “greenhouse climate” to a cooler “icehouse climate.” This cooling caused Antartica to freeze over.

While ice sheets were covering Antarctica, the Atlantic’s current system, the Atlantic meridional overturning circulation (AMOC), was switched on carrying warm water and nutrients on its global conveyor belt.

Today this Atlantic heat pump keeps Europe’s winters warm, but until recently, researchers were unsure what switched the system on.

In a new study, researchers from Stockholm University’s Bolin Center for Climate Research used geophysical data and climate modeling to understand what triggered the AMOC during the Eocene-Oligocene Transition, 34 million years ago.

The modeling showed that increases in ocean salinity and changes in freshwater concentrations helped kickstart the AMOC.

When the climate was still in its “greenhouse” phase, freshwater flooded out of the Arctic, but as things cooled and the Arctic-Atlantic Gateway closed, the Atlantic’s saltwater concentrations increased.

“We found that the Arctic-Atlantic gateway closed due to tectonic forces, causing a dramatic increase in North Atlantic salinity,” said David Hutchinson, the lead author of the study. This caused warming of the North Atlantic and Europe, and kickstarted the modern circulation that keeps Europe warm today.”

The climate models then showed how increases in salinity correlated with the formation of deeper water in the Atlantic.

“Not only did deep water start forming in the Atlantic Ocean, it also stopped forming in the North Pacific at the same time, which matches geological evidence,” said Hutchinson. “We were surprised to find that our computer simulations can explain both of these changes due to salty ocean currents connecting the Pacific to the Atlantic. Our study is the first to show that these two events are linked, which is very exciting.”

The study helps show what climate conditions might look like if the Arctic undergoes warming again due to high levels of atmospheric CO2. The AMOC keeps Europe warm, but if the current system is disrupted, Europe could soon experience colder winters and much drier and hotter summers.

“Our study helps to bridge the gap between climate modelling and geological observations of the deep past,” said Hutchinson. “We hope this will inspire further research from both communities on the deep circulation of the ocean.”

The researchers published their findings in the journal Nature Communications.