Aurochs, the extinct supercow, coming back to Europe • Earth.com 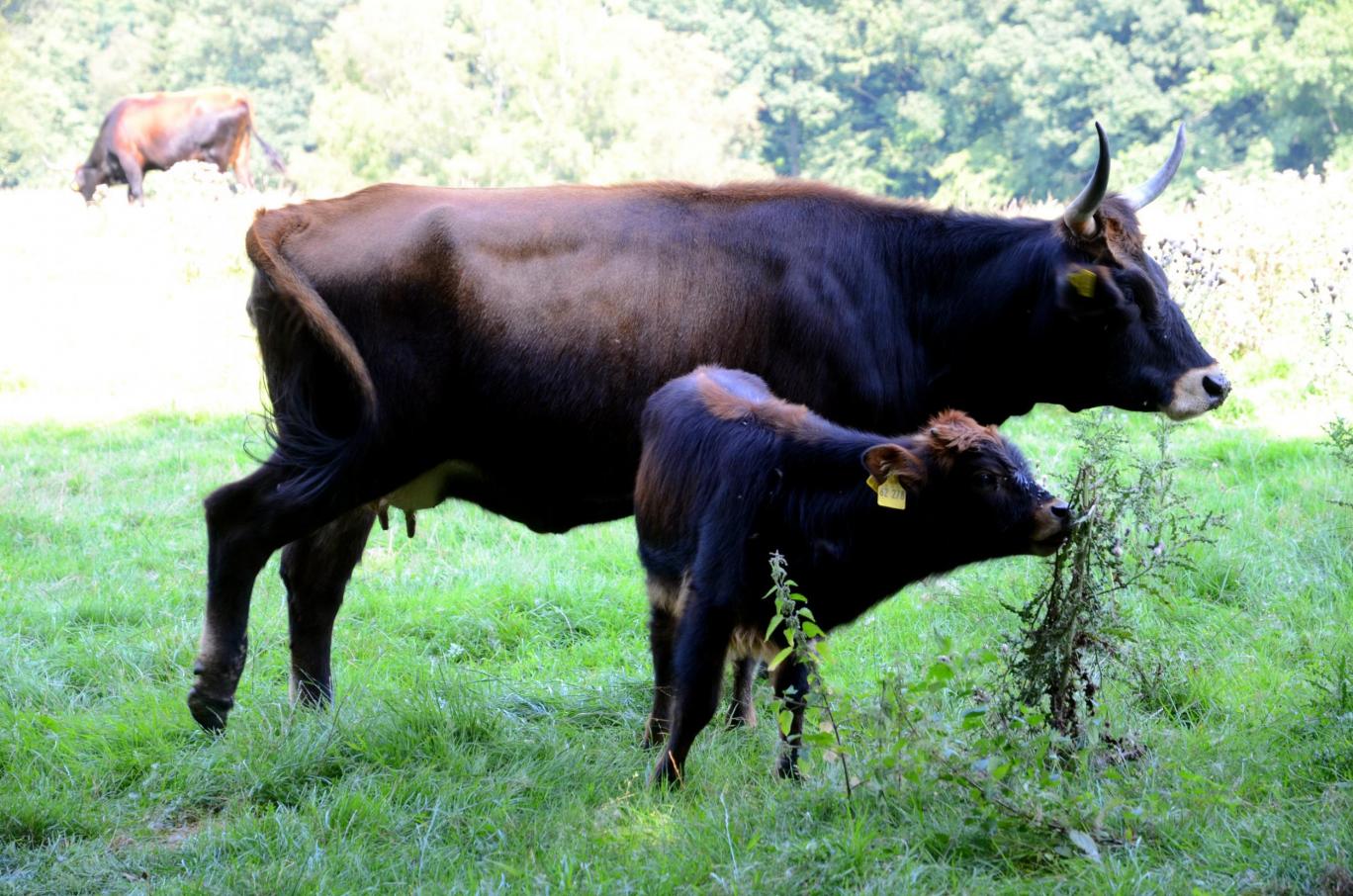 Aurochs, the extinct supercow, coming back to Europe

Cows’ ancestors, the aurochs, stood almost as tall as elephants, boasting powerful frames and fearsome horns to discourage predators. Our ancestors held aurochs in high esteem, immortalizing them in prehistoric cave paintings. They lived for thousands of years as the largest land mammals in Europe. As the human population number grew, aurochs’ numbers were decimated. In 1627, the last of their species perished – one of the first ever recorded cases of extinctions.

Conservationists believe the loss of this herbivore was tragic for biodiversity in Europe. They claim the aurochs’ huge appetite provided a natural “gardening service,” maintaining landscapes and creating perfect conditions for other species to thrive.

That theory is now being put to the test as a “near 100% substitute” of the pre-cow is being returned to the ecosystem.

The Tauros programme was launched in 2008 by Ecologist Ronald Goderie, who sought to address failing ecosystems. This powerful historical herbivore in European history offered a solution.

“We thought we needed a grazer that is fully self-sufficient in case of big predators . . . and could do the job of grazing big wild areas,” says Goderie. “We reasoned that this animal would have to resemble an auroch.”

Casting aside gene editing or high-tech de-extinction approaches used by other scientists, Goderie used a method called back-breeding to create a replacement bovine which he called “Tauros.”

As auroch genes still remain in various breeds of cattle, geneticists were able to advise that breeding some species together could produce offspring with qualities close to an auroch. They then bred the child.

With each generation, the animals got closer to the ancient auroch. The team were then able to test the offspring’s DNA against the auroch’s complete genome, which was sequenced at University College Dublin.

“You could see from the first generation that apart from the horn size, there was enough wild in the breed to produce animals far closer to the auroch than we would have expected,” says Goderie. Goderie predicts that in seven generations – by 2025 – the breeding would complete his desired outcome. Now in their fourth generation, pilot schemes in Europe show encouraging results.

The Tauros programme partnered with Rewilding Europe, which supports the restoration of natural processes through such projects. Rewilding Europe provided protected land across the continent in Croatia, Spain, Portugal, the Czech Republic, and Romania. These cross-breeds were able to test themselves in the wild.

“We see progress not only in looks and behavior but also in re-domestication of the animals,” he says. “This is a challenging process as they have to adapt to the presence of large packs of wolves.”

Sadly, herds of cows are slaughtered by local wolves at the Croatian site. But the Tauroi learned how to defend themselves and few perished. As selective breeding continues, it’s encouraging for the scientists to see these animals already servicing a function in the wild.

“We support the comeback of large herbivores as they are key species for the specific role of grazing and browsing,” says Frans Schepers, who is the managing director of Rewilding Europe.

“Bovines can shape habitats and facilitate other species because of their behavior, and the more primitive and close to the wild the better because it means that eventually they can become part of the natural system. Without grazing everything becomes forest, or barren land when there is agriculture. The gradients in between are so important for biodiversity, from open soil to grassland and ‘mosaic landscapes.’”

However, critics of the initiative are concerned that introducing new species could have terrible effects for regional ecology. The International Union for the Conservation of Nature (IUCN) issued new guidelines.

“Typically emphasis is placed on technical feasibility, without sufficient emphasis on risks. Questions abound whether primarily wetland forests like the aurochs used to inhabit still exist, whether it could negatively impact wild or domestic plants or animals, and if it might endanger people,” Dr. Axel Moehrenschlager expressed, IUCN Chair of the Reintroduction Specialist Group.