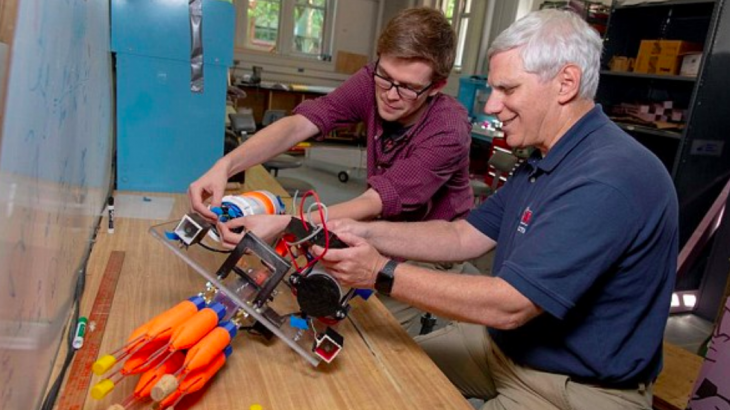 Lionfish are a major invasive species in the western Atlantic Ocean, negatively impacting ecosystems off the coastal US and Caribbean islands. This species originates from the South Pacific and Indian oceans, but has no natural predators in the areas it inhabits within the western Atlantic, creating competition problems with native species. Luckily, scientists may have come up with a solution – and it involves a killer robot.

A team of researchers at Worcester Polytechnic Institute (WPI) have developed a spear-wielding submersible robot than can hunt lionfish autonomously.

“There are economic and environmental benefits to this, and the fish are delicious,” says Brandon Kelly, an undergraduate student at WPI. “I’ve seen the massive devastation caused by these fish and it really made me want to work on this project. We felt like we could create some change in the world.”

Lionfish can decimate the juvenile fish populations of an area by as much as 90 percent in just five weeks – according to the Ocean Support Foundation. They are a threat to coral reefs in a region that is already struggling to survive. Although people are encouraged to harvest these fish, their sharp spines and deadly venom make this rather challenging. Luckily, robots are immune to lionfish venom.

The robot has eight spear tips mounted on a carousel, along with left and right cameras and air-filled buoyancy chambers that help equalize the robot after it releases a spear. The researchers developed a system – based on machine learning –  that allows the robot to tell lionfish apart from other species. Once it locks on to the correct target, it launches a spear and harvests the fish. The team states that the robot is able to recognize lionfish with over 95 percent accuracy.

“The goal is to be able to toss the robot over the side of a boat and have it go down to the reef, plot out a course, and begin its search,” says Craig Putnam, senior instructor in computer science and associate director of WPI’s Robotics Engineering Program. “It needs to set up a search pattern and fly along the reef, and not run into it, while looking for the lionfish. The idea is that the robots could be part of the environmental solution.”