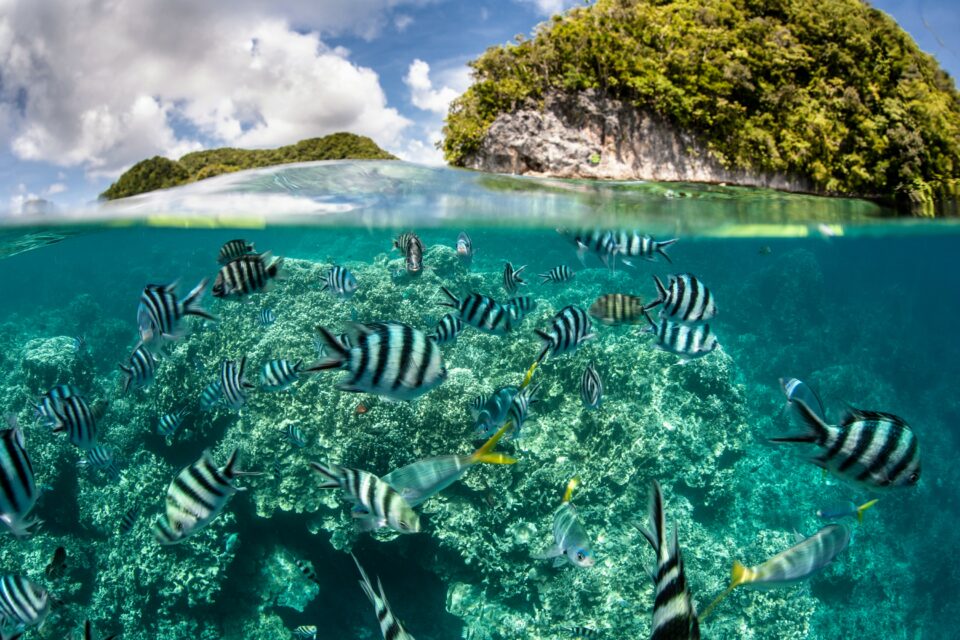 Monitoring marine biodiversity and ocean health usually involves teams of scientists that collect samples of seawater while traveling around on board a research vessel. This is a time-consuming and costly activity that can really only survey small areas and involves considerable laboratory work once back on shore to identify all the organisms present in each sample.

The long-range autonomous underwater vehicle (LRAUV) is a nimble, streamlined robot that can travel to remote areas of the ocean and remain submerged for long periods of time. The Environmental Sample Processor (ESP) is a robotic “laboratory-in-a-can” that filters seawater and extracts the eDNA for future analysis. By equipping an LRAUV with ESP technology, researchers can expand the scale of ocean monitoring enormously over time and space.

“We know that eDNA is an incredibly powerful tool for studying ocean communities, but we’ve been limited by what we can accomplish using crewed research vessels. Now, autonomous technology is helping us make better use of our time and resources to study new parts of the ocean,” said study lead author Kobun Truelove, a biological oceanographer at MBARI.

Organisms that inhabit marine environments, from the smallest plankton to the largest whales, form communities that are connected by food webs. The biodiversity of these organisms is a measure of ocean health and it is important that scientists know which organisms are present in which localities. Autonomous tools like the LRAUV and ESP enable MBARI researchers to maintain a persistent presence in the ocean and monitor changes in sensitive ecosystems in ways that were not possible previously.

“Organisms move as conditions change in our oceans and Great Lakes, affecting the people and economies that rely on those species. We need cheaper and more nimble approaches to monitor biodiversity on a large scale. This study provides the synergistic development of eDNA and uncrewed technologies we need, in direct response to priorities laid out in the NOAA ‘Omics Strategic Plan,” explained study co-author and NOAA scientist Kelly Goodwin.

In the current research, MBARI collaborated with researchers at the NOAA Atlantic Oceanographic and Meteorological Laboratory and the University of Washington to complete three expeditions in the Monterey Bay National Marine Sanctuary. The teams carried out sample collection via MBARI’s fleet of LRAUVs as well as conducting traditional, ship based sampling using MBARI’s three research vessels and the NOAA Fisheries ship Reuben Lasker. The purpose of this multi-pronged approach was to find out whether the two different sampling procedures produced comparable results in terms of the marine organisms present in the different water samples.

The ship-based researchers lowered bottles to a specific depth to collect and preserve water samples, while LRAUVs equipped with ESP technology autonomously sampled and preserved eDNA at similar locations and depths. The eDNA samples were returned to the lab for in-depth sequencing.

Environmental DNA allows scientists to detect the presence of aquatic species from the tiny bits of genetic material they leave behind. This DNA soup offers clues about biodiversity changes in sensitive areas, the presence of rare or endangered species, and the spread of invasive species – all of which is critical to understanding, promoting, and maintaining a healthy ocean.

In this study, researchers analyzed eDNA samples with a technique known as metabarcoding. This method looks for short sections of DNA, known as gene markers, which are shared by related organisms. In this way the researchers can get an idea of the groups of organisms that are present in the water at each location. This technique enables eDNA data to be interpreted as a measure of biodiversity.

The researchers analyzed four different types of gene markers, each representing a slightly different level of the food web. Together, the results yielded a more holistic picture of community composition. The samples collected from research ships and autonomous vehicles revealed similar patterns of biodiversity, which supports the future use of autonomous vehicles for marine sampling and monitoring.

LRAUVs are able to travel for weeks at a time and for hundreds of kilometers underwater. They allow more frequent sampling in areas of interest than do traditional research vessels. Autonomous robots will allow researchers to study previously unsurveyed regions of the ocean and fill in gaps in knowledge about global ocean health. Ship-based research will continue to play an important role in oceanographic studies, but adding new autonomous technology to the toolkit will expand capacity for research, monitoring, and resource management. Ultimately, MBARI researchers envision deploying a fleet of LRAUVs equipped with ESP technology.

Truelove noted that the findings from the study mark an exciting step forward for monitoring marine ecosystems. “This work is all about increasing the scale of eDNA research. Instead of looking at an individual species, we can start to more broadly characterize biological community structure in the ocean,” he said.

“Good data are the bedrock of sustainable ocean management,” said Francisco Chavez, MBARI Senior Scientist and a co-author of the study. “Regular environmental DNA monitoring tells us who is there and what is changing over time. When it comes to understanding the impacts of climate change – one of the biggest threats to ocean health – this information is essential.”

The research is published today in the journal Environmental DNA.