Baby leatherbacks are blind to the ocean • Earth.com 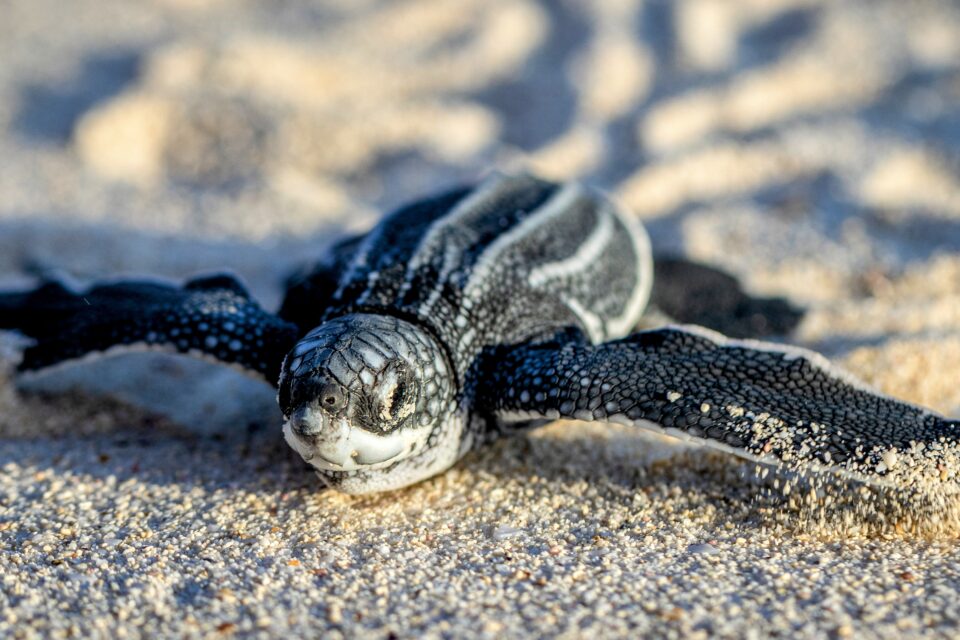 Baby sea turtles, including leatherbacks (Dermochelys coriacea), typically hatch at night. The young leatherbacks use the difference of light reflecting off the sea to orient themselves. It’s because of this method of navigation that turtles which hatch near inhabited areas often crawl toward the light from buildings and away from the ocean.

While trying to find the ocean, leatherback babies sometimes crawl in circles. This “circling” behavior depletes energy and leaves the young turtle at greater risk of being picked off by a predator such as a crab or gull.

To understand why circling happens in leatherbacks, researchers at Florida Atlantic University first studied how sensitive the babies are to light. The scientists determined that compared to hard-shelled loggerhead sea turtles, leatherbacks are 10 to 100 times less sensitive to light.

The research, which was published in the journal Animal Behaviour, revealed that leatherback circling increased when there was a new moon and the night sky was at its darkest. On the other hand, loggerheads rarely circled, even when they had little light to guide their way. The results are surprising because while leatherbacks feed during both day and night, loggerheads are known to only be active during daylight hours.

“Leatherback eyes are less sensitive to all wavelengths of light than loggerheads, and during a dark night, they experience difficulty in determining the location of the seaward horizon,” said study first author Samantha Trail.

“Even so, leatherback hatchlings eventually crawl to the sea, even during new moon. It just takes them longer because they stop occasionally to circle, which we think enables them to re-evaluate, and eventually confirm, the correct crawl direction.”

The real question is why leatherback turtles would remain less sensitive to light when it’s so important for their survival. From an evolutionary perspective this is a major cost.

The scientists theorize that leatherbacks haven’t evolved more light sensitivity because their difference in vision has other benefits. Perhaps having less light sensitive eyes allows them to better find prey, mates or suitable habitat – which is possible because loggerheads live in different parts of the ocean.