Bats avoid collision by working together, quieting down in a crowd • Earth.com 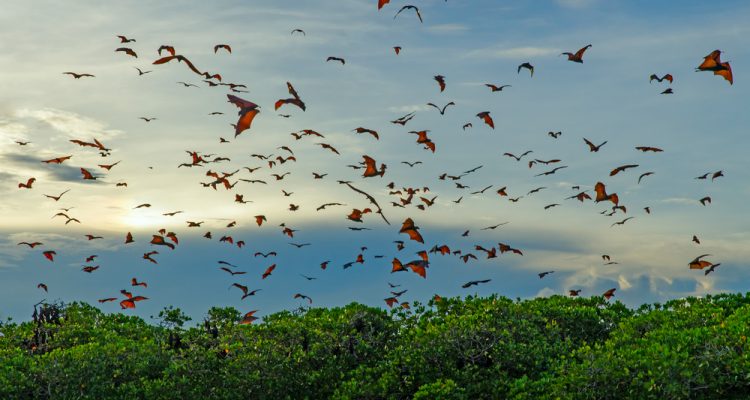 Bats avoid collision by working together, quieting down in a crowd

Everyone knows bats use echolocation to navigate while they fly. They call out, then listen to the echoes that bounce back to figure out where they are, “see” any obstacles that might block their path, and – most importantly – find dinner. But how do bats avoid collision when flying in large groups?

Scientists have wondered how flying in a crowd doesn’t “blind” bats. How does each individual bat hear its own echolocation among hundreds of others?

Turns out, they don’t.

Dr. Amanda Adams and Dr. Michael Smotherman at Texas A&M University decided to study some Mexican free-tailed bats, captured in the wild, to see how bats adjust their own echolocation when other bats are around.

They used a small, empty, soundproofed room with microphones for recording to conduct the experiment. The bats were each allowed into the room one at a time. The microphones recorded their calls, giving the scientists a baseline frequency for each bat.

Then, the researchers used four speakers around the room to play calls from other bats. They simulated situations where anywhere between one and four “imaginary bats” shared the room. Then they recorded the bats again, to see if they called less or more.

They repeated the experiments after “cluttering” the room with strings holding motion detectors.

What they found was that bats call more frequently when they’re alone. As soon as they hear another bat in a nearby location, they begin calling less often.

They do this because when one bat’s echolocation call cuts across another, both bats lose the information they would have received from the echoes.

Adams and Smotherman have dubbed the behavior “mutual suppression,” and they believe it’s how bats are able to live socially.

They also found that in the cluttered room, bats hit the motion-sensitive strings more often when the imaginary bats were calling more frequently. Adams and Smotherman are not yet sure if the cries interfered with the real bats’ navigation.

The bats only seem to practice mutual suppression when another bat is chatty, the researchers found. When they used a “RoboBat” in the room to simulate the noises of another bat, the live bat cried more if RoboBat was silent, and got quieter when RoboBat was also calling out.

Adams and Smotherman plan to continue their research into echolocation and mutual suppression. It could prove useful in creating new wireless signal technology, they said.

Adams shared their research at the annual conference of the Society for Integrative and Comparative Biology in New Orleans, Louisiana.