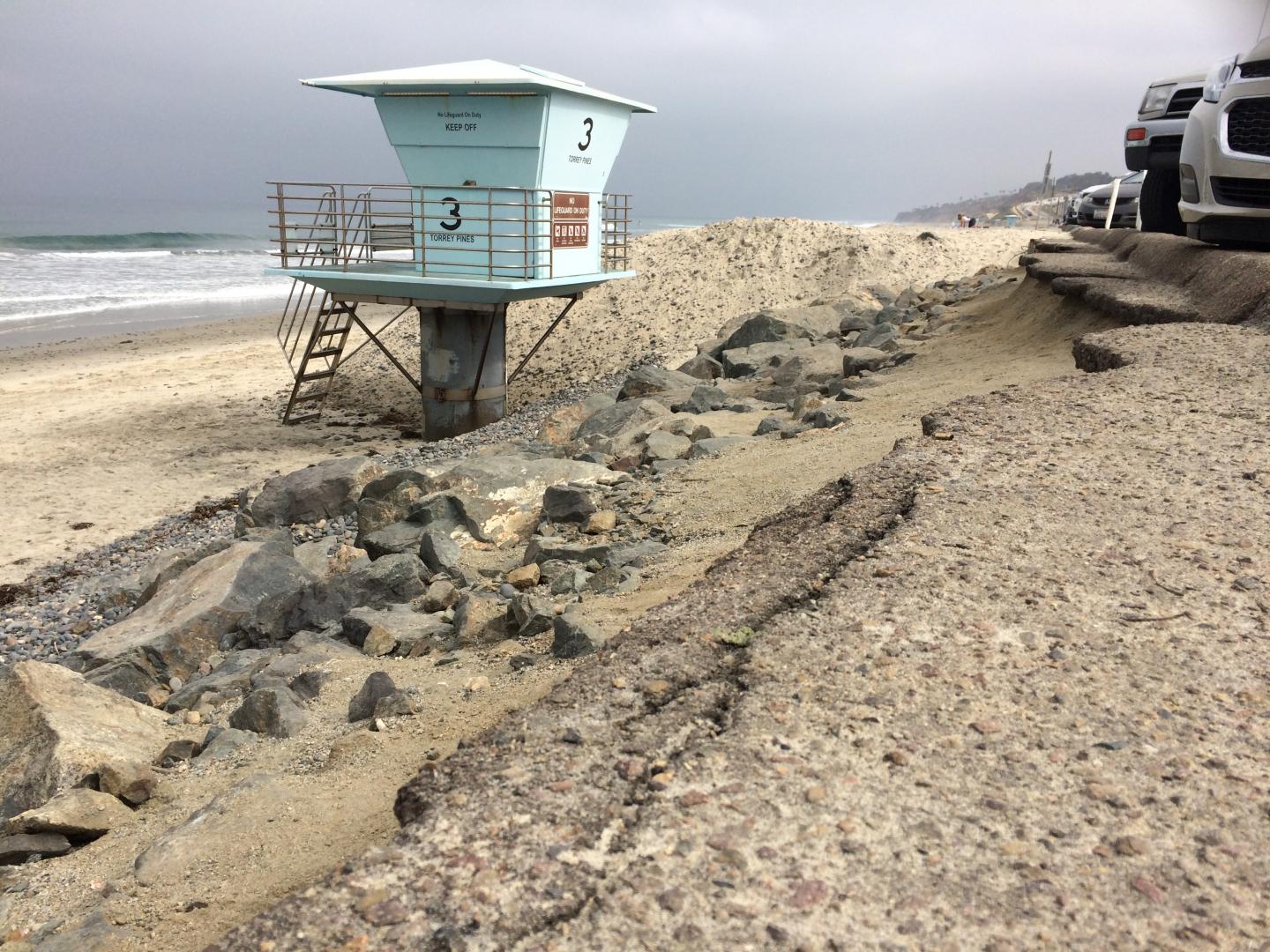 A team of researchers at Scripps Institution of Oceanography at the University of California San Diego compared sand levels on several San Diego beaches during the last seven winters. The El Niños of winter 2009-10 and 2015-16 were the two most erosive. Three San Diego County beaches that received imported sand in 2012 were about 10 meters (33 feet) wider, and one to two meters (three to six feet) higher in 2015-16 than in 2009-10, with the coarseness of the sand apparently aiding the effectiveness of the effort.

In contrast, Torrey Pines State Beach, which had received no recent sand infusions, had slightly more storm erosion than in 2009-10.

“After sand is lifted off the ocean floor by waves, coarse grains fall more quickly to the bottom than finer grains, making it more difficult for the currents to move them around,” said study leader Bonnie Ludka, a former Scripps graduate student partially supported by a National Science Foundation Graduate Research Fellowship.

The research, funded by the California Department of Parks and Recreation, the U.S. Army Corps of Engineers, and Sea Grant, focused on San Diego beaches but has implications for beaches worldwide. As sea levels rise, already threatened coastal infrastructure will become more vulnerable to flooding and erosion. El Niño is superimposed on this long-term trend, modifying regional coastal sea levels by as much as 25 centimeters for a year or more. Most significantly, El Niño modulates the locations of storms responsible for large waves that can raise nearshore water levels by a meter or more.

Sand nourishments widen beaches to promote tourism and protect coastal infrastructure, but the transport of the sand by waves and currents remains poorly understood.

The 2012 effort deposited 1.15 million cubic meters of sand on eight San Diego County beaches (including Cardiff, Solana, and Imperial beaches) at a cost of $28.5 million. A 2001 project added 1.6 million cubic meters of sand to 12 local beaches at a cost of $17.5 million. The sand pad placed at Torrey Pines that year was swept out to sea after just one storm. The sand grains imported there were of a similar size as the sand naturally found on that beach.

The 2015-16 winter provided a wealth of data to researchers, who used relatively new technologies. Ludka, who received her doctorate in oceanography from Scripps in May, and other scientists used jet-ski- and ATV-mounted GPS instruments to study beach slope and width.

The study is described in the article “Mid-El Niño erosion at nourished and unnourished Southern California beaches” appearing in the journal Geophysical Research Letters.

“We do not understand the underlying processes sufficiently to design nourishments for effective mitigation,” said Guza. “Monitoring is necessary to learn as we go, from failures as well as successes.”